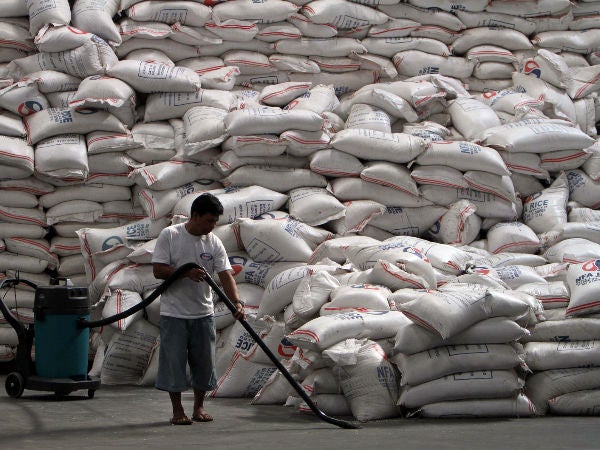 As public discontent over the rising prices of basic commodities grows, President Benigno Aquino III on Friday ordered law enforcers to prosecute the alleged conspirators suspected to have been hoarding the goods and profiting from high prices.

Speaking to reporters in Iloilo City, Mr. Aquino said he has directed the National Bureau of Investigation to work with the Philippine National Police in investigating “the possibility” of the existence of a cartel manipulating the prices of rice and garlic.

The National Food Authority (NFA) is also conducting operations against price manipulators and cracking down on unauthorized rice traders who are profiting from the high prices, he said.

Following a meeting on food security and price monitoring on Tuesday, Malacañang is rallying various national agencies to curb the steep rise in the prices of rice, garlic and other basic commodities as angry consumers have raised an outcry in recent weeks.

Not a supply problem

Speaking to reporters during the inauguration and inspection of P3.1 billion worth of government projects in Iloilo City on Friday, Mr. Aquino dismissed reports that the sudden increase in prices was caused by production and supply problems.

According to the President, agriculture officials have told him that they suspect a possible conspiracy among dealers of garlic and rice to create a shortage in the market and drive up prices.

“Did the supply come short? Some are saying that there’s more than enough supply, but there seems to be a suspicion—I repeat suspicion—that there’s a conspiracy to keep the prices high, especially that of garlic,” he said in an interview in Iloilo City aired over state-run dzRB.

Mr. Aquino said the same conspiracy was suspected among dealers of rice which he said has caused an “artificial shortage” of the staple.

“Someone is taking advantage of the situation, and I repeat, this is a suspicion. While there is sufficient supply, there’s none in the market. It seems that they noticed a low supply of the NFA, and they probably thought this was the right time to increase prices,” he said.

Mr. Aquino ordered the NBI to coordinate with the PNP in investigating the cartels, and “file the appropriate charges.”

“We need to know exactly the real cause for the rising prices of garlic, notwithstanding the apparent absence of a supply problem,” De Lima said in a text message to reporters.

“If supply is not a problem, how come prices are quite high?” she asked.

She warned that the NBI will charge those responsible for “hoarding, profiteering or cartelization” of these goods.

“We have enough provisions of law which address such unfair and wrongful practices. And these are penal provisions,” De Lima said.

The average retail price of well-milled rice reached P42.19 a kilogram early this month, an increase of 19 percent from a year ago, according to the Department of Agriculture.

The farmgate price of palay was recorded at an average of P20.83 per kilo, up by 26 percent.

The price of garlic shot up to P300 a kilo for the imported variety and P180 a kilo for the local variety, prompting the agriculture department to deploy rolling stores to sell locally grown garlic.

Because of the “artificial shortage,” the government will be importing rice from Vietnam next month, Mr. Aquino said.

“We’re importing rice so that we can fill the artificial shortage and make sure the hoarders lose money,” he said.

Francis Pangilinan, the presidential assistant for food security and agricultural modernization, said an additional 200 metric tons of rice would be imported from Vietnam to replenish the NFA’s buffer stocks.

Echoing the President’s theme that the rice situation was the result of “abuse” by certain unscrupulous sectors, Pangilinan said his office is working with the departments of finance and of justice as well as the Bureau of Customs (BOC) and the PNP on what measures to take.

Aside from raising the available supply of the staple, he said the NFA was working with the PNP to monitor and inspect warehouses for possible hoarding and diversion of NFA rice, as well as with the DOJ to investigate and prosecute erring traders.

“All of these efforts are geared toward easing the effect of the increase in the price of rice on the consumers,” Pangilinan said.

Pangilinan said the NFA is coordinating with the BOC on the latter’s planned acquisition of 20,000 tons of confiscated rice.

He said the additional 200,000 tons of rice to be imported from Vietnam was on top of the 800,000 tons that was contracted through a bidding held last April. Two suppliers, both Vietnamese corporations, won the contracts.

“A repeat order of 25 percent (by volume) is allowed under the procurement law,” Pangilinan said in a statement.

Data from the Philippine Statistical Authority show that as of May 1, the NFA’s stock has dwindled to 460,000 tons, which is good for 14 days of national consumption.

The NFA is mandated to maintain a buffer stock that should last for 15 days which, at a national consumption rate of 34,000 metric tons daily, is about 500,000 MT.

Based on the government’s measure of rice self-sufficiency, supply must exceed yearly demand by 90 days’ worth of buffer stock.

The NFA intends to maintain until September the doubled release to markets nationwide—at 25,800 MT daily—of regular-milled rice priced at P27 a kilo and well-milled rice at P32.

The 800,000 MT coming from Vietnam are expected to have been delivered fully by the end of August.

The President said he has also ordered the relevant agencies to study long-term measures that will address the country’s rice supply needs. He said he has directed the Department of Science and Technology to use satellite imagery to plot areas in the country planted to palay and incorporate data like potential harvests, among other things. With a report from Christine Avendaño