MANILA, Philippines- Pirated and counterfeited items were flattened and shredded on Friday morning in a ceremonial destruction at Camp Crame in Quezon City.

The pirated items were part of a 6.8 billion-worth of seized goods since the start of 2014, Intellectual Property Office (IPO) of the Philippines Director General Ricardo Blancaflor said. 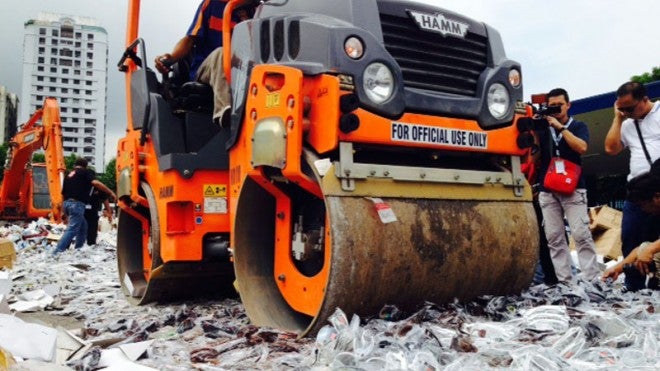 Blancaflor said the anti-piracy crusade of the IPO together with the Philippine National Police and the National Bureau of Investigation led to the exclusion of the Philippines in the world piracy watch.

“We have long deserved this,” he said.

According to him, piracy posed risk to the Philippine economy as well as the security and health of local consumers.

Meanwhile, Director Virgilio Mendez of the NBI assured the agency’s commitment to end the decades-long battle of piracy in the country.

During the ceremonial destruction, PNP personnel used an armored car and a grinder to crush the pirated items that included shoes, DVDs, CDs and counterfeit drugs.

The ceremonial destruction was in connection with the Anti-Word Counterfeiting Day.

P1-B worth of counterfeit goods seized in Parañaque