P1-B worth of counterfeit goods seized in Parañaque 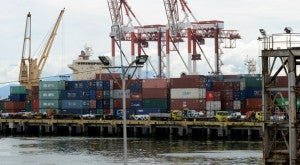 (This is the biggest raid conducted by the joint team of the IPO, BOC and NBI because of the amount of goods we saw. It appears to be a nationwide operation.)

He said the goods were meant to be distributed all over the country, based on the information tags attached to the containers.

Lasala said their surveillance work lasted two months and was made possible with the help of reliable informants.

The BOC then issued a warrant of seizure and detention that allowed the team to enter the compounds and extract the items.

Lasala said the NBI would continue to investigate and find those behind the smuggling and distribution of counterfeit goods. In the meantime, the items will be stored at the Customs warehouse.

He also said the BOC was investigating how the items were smuggled into the country.