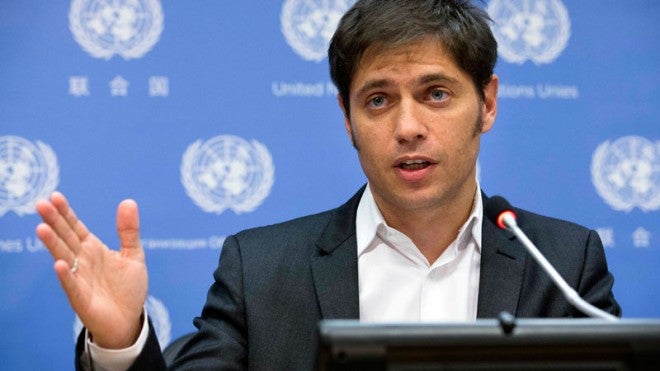 NEW YORK — A judge Thursday denied Argentina’s request to extend deadlines to repay a $1.65 billion debt to U.S. hedge funds despite warnings by the country’s leaders that making the payment could lead it into a catastrophic default.

The federal judge said Argentina’s request was “not appropriate” because the requirement to pay U.S. hedge funds involved in the Manhattan litigation was only triggered if Argentina makes a payment to bondholders who exchanged their bonds for bonds of lesser value in the years after Argentina’s economy collapsed in 2001.

Argentina’s economy minister, Axel Kicillof, said Argentina has taken steps to pay $832 million owed by Monday to creditors who participated in debt swaps in 2005 and 2010.

“Not paying while having the resources and forcing a voluntary default is something that is not contemplated in Argentine law,” Kicillof said. “It would be a clear violation of the debt prospects.”

Kicillof has said the payments could sink the nation’s economy, forcing a default on $24 billion of debt, and trigger financial havoc around the world.

If Argentina does not also pay the U.S. bondholders who refused to join the debt swaps, the ruling bars it from using the U.S. financial system to pay other bondholders.

Lawyers for Argentina had asked the judge to delay an end-of-the-month deadline to make payments to U.S. hedge funds.

Lawyers for the holdout bondholders led by New York billionaire Paul Singer’s NML Capital Ltd. have countered that Argentina was just trying to delay paying the $1.65 billion it owes.

The judge also said in Thursday’s order that the handling of any further payments due bondholders who had exchanged their bonds for lesser value will be handled as part of negotiations involving a special master he appointed this week.

The winners of the more than decade-long debt battle asked the judge on Tuesday to deny Argentina’s request for more negotiating time to avoid a default. The plaintiffs said that Argentina must first show it’s serious about paying the judgment and that Argentina will only try to evade the court’s orders if it’s given more time.

Argentina President Cristina Fernandez has said she wants the judge’s support for a process that would enable her government to resolve 100 percent of Argentina’s debts — including holders of the last 7 percent of bonds that went into default in 2001 and are held by investors who weren’t part of the winning case.

Argentina offers to pay debts with cash and bonds