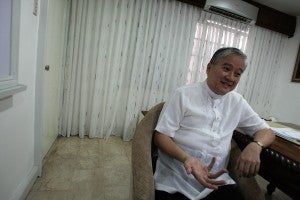 MANILA, Philippines–The local Catholic Church is not absolutely opposed to the idea of legalizing marijuana so long as it is for medical purposes.

“Catholic health care ethics, in fact, considers as morally justifiable the use of marijuana for terminal cancer patients in severe pain,” Lingayen-Dagupan Archbishop Socrates Villegas, the president of the Catholic Bishops Conference of the Philippines (CBCP), said in a statement.

“The present provisions of Republic Act No. 9165 [the Comprehensive Dangerous Drugs Act of 2002] allow the regulated prescription and use even of such substances as marijuana as part of pain management in such medical conditions as terminal cancer,” Villegas said.

Section 2 of RA 9165 states: “The Government shall aim to achieve a balance in the national drug control program so that people with legitimate medical needs are not prevented from being treated with adequate amounts of appropriate medications, which include the use of dangerous drugs.”

Villegas issued the statement following the recent filing in Congress by Isabela Rep. Rodolfo Albano III of House Bill No. 4477, the Compassionate Use of Medical Cannabis Act. The resolution has since gained the support of several lawmakers.

Under the bill, the government must “legalize and regulate the medical use of cannabis which has been confirmed to have beneficial and therapeutic uses to treat chronic or debilitating disease or medical conditions.”

The bill refers to diseases that cause a patient to suffer chronic pain, severe nausea and seizures, among other conditions.

Despite legalizing the medical use of cannabis, the bill prohibits the possession and smoking of marijuana for nonmedical purposes.

The bill would also create a Medical Cannabis Regulatory Authority under the Department of Health.

Earlier, Fr. Dan Cansino, executive secretary of the CBCP’s Episcopal Commission on Health Care, expressed concern about the possible adverse effects of the proposed legislation such as leading users to greater substance abuse despite the limitations provided for in the bill.

Villegas said it was important the lawmakers and other government officials assured the public of protection from any dangers that may result from making marijuana readily available and accessible.

“We must, however, express concern about the surreptitious introduction of dangerous and addicting substances and making them legally readily available to those prone to addiction. The effects cannot be anything but harmful, especially for the youth and children,” he said.