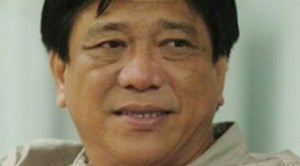 MANILA, Philippines–The Department of Agriculture on Thursday dismissed as a “nuisance suit” the latest plunder complaint filed against Secretary Proceso J. Alcala in the Office of the Ombudsman.

Dennis M. Guerrero, Alcala’s chief of staff, said that “baseless and unfounded” allegations of plunder were filed repeatedly against Alcala.

Last Wednesday, the group called Youth Act Now! said it filed its complaint against Alcala for his alleged part in the “misuse of P36.25 million in PDAF (Priority Development Assistance Fund) when he was a lawmaker representing the second district of Quezon province.”

The group also accused Alcala of taking part as the agriculture secretary in the “transfer of P39 million in public funds to Janet Lim-Napoles and her NGOs.”

“There seems to be a cottage industry of those who find fault in everything he does,” Guerrero said. “We also see the hand of local politics in all of this.”

He said that of the four plunder cases filed against Alcala, the agriculture chief had received a copy of only one of them.

The Inquirer’s count, however, showed that the latest complaint was the fifth against Alcala.

Earlier this month, Inquirer.net reported that the Metro Manila Vendors Association filed a complaint accusing Alcala of profiting from an allegedly overpriced deal to import 800,000 tons of milled rice from Vietnam.

“It’s so easy to find a group or even an individual to file plunder charges,” Alcala said in an interview on Thursday. “It’s so obvious there are (interest groups) behind these cases.”–Ronnel W. Domingo