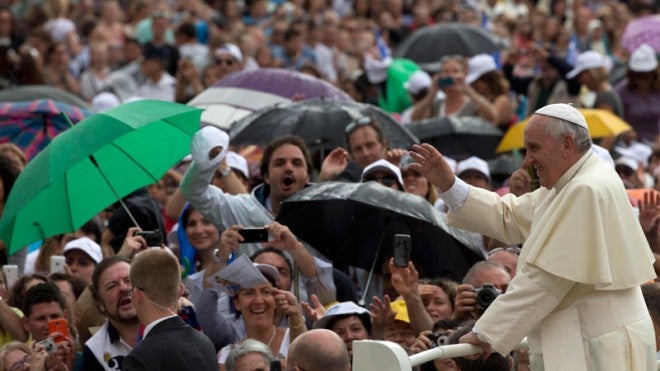 VATICAN CITY  — The Vatican conceded Thursday that most Catholics reject its teachings on sex and contraception as intrusive and irrelevant and officials pledged not to “close our eyes to anything” when it opens a two-year debate on some of the thorniest issues facing the church.

Core church doctrine on the nature of marriage, sexuality, abortion and divorce isn’t expected to change as a result of the debate that opens in October. But Pope Francis is well aware that the church has lost much of its relevance and credibility in today’s secular world and he is seeking to redirect his ministers to offer families, and even gays in civil unions, a “new language” that is welcoming and responds to their needs.

The Vatican on Thursday issued the working document for the synod discussions, which in itself marked a sharp change from past practice: The Vatican sent out a 39-point questionnaire seeking input from ordinary Catholics around the world about their understanding of, and adherence to, the church’s teaching on sexuality, homosexuality, contraception, marriage and divorce.

Thousands of ordinary Catholics, clergy and academics responded, providing the Vatican with an unprecedented compilation of grass-root data to guide the discussion. Usually, such working papers are compiled by bishops alone.

The responses, which were summarized in the working document, were brutally honest.

“A vast majority” of responses stressed that “the moral evaluation of the different methods of birth control is commonly perceived today as an intrusion in the intimate life of the couple and an encroachment on the autonomy of conscience,” the document said.

“Many responses recommend that for many Catholics the concept of ‘responsible parenthood’ encompasses the shared responsibility in conscience to choose the most appropriate method of birth control.”

Confronted with such a reality, Vatican officials were asked at a press conference if the church might actually change its position to align itself with the practice of most of its faithful rather than hold onto teachings that so many Catholics reject.

Based on Francis’ own wishes to open the discussion at all, deliberate for so long and canvass ordinary Catholics for their input, “We will not close our eyes to anything,” said Monsignor Bruno Forte, a meeting organizer. “These problems will be considered.”

That said, the document makes clear the value of the church’s core doctrine.

It laments that the media and its own priests have failed to communicate the “positive” aspects of the Vatican’s key document banning artificial contraception, the 1968 encyclical Humanae Vitae. And it stresses that what is needed is better pastoral outreach and a “new language” to communicate the complete vision of marriage and family life that the church espouses.

“Some observations inferred that the clergy sometimes feel so unsuited and ill-prepared to treat issues regarding sexuality, fertility and procreation that they often choose to remain silent,” the document said.

The officials presenting the report were asked what advice about sexuality, matrimony and the ups and downs of raising children a group of celibate men could offer Catholics when they themselves had chosen not to have sex, marry or have families.

Cardinal Lorenzo Baldisseri, who is organizing the synod, said many lay Catholics were consulted in the preparation of the working document, and the Vatican spokesman noted that there was “ample representation” of the laity at Thursday’s press conference: a married couple celebrating their 25th anniversary joined the six clerics on the podium.

The document itself, though, acknowledged that the church had a credibility problem.

“Responses from almost every part of the world frequently refer to the sexual scandals within the church (pedophilia in particular) and in general, to a negative experience with the clergy and other persons,” it said. “Sex scandals significantly weaken the church’s moral credibility.”

But citing Francis’ frequent call for the church to be more merciful and less judgmental, it recommends new pastoral guidelines to confront the increasing reality of legal recognition for same-sex unions, stressing that gays must be treated with dignity, respect and spared discrimination.

“The episcopal conferences amply demonstrate that they are trying to find a balance between the church’s teaching on the family and a respectful, non-judgmental attitude toward people living in such unions,” it said. It distinguished between gays who are “discreet” in theirlifestyle and those who actively, “often aggressively” call attention to their unions.

“The great challenge will be to develop a ministry which can maintain the proper balance between accepting persons in a spirit of compassion and gradually guiding them to authentic human and Christian maturity,” it said.

And it suggests ways to improve and expedite the church’s cumbersome and expensive annulment process to enable Catholics who divorce and remarry to receive the sacraments. Currently, such divorced and civilly remarried Catholics cannot receive communion because the church thinks they are essentially living in sin and committing adultery.

The document suggested creating more marriage tribunals in parts of the world where they don’t exist to handle annulment requests, removing the time-consuming automatic appeals or shifting to an administrative, rather than judicial process altogether.

Francis has spoken out about the need for a merciful approach to the divorce-remarried issue, but it remains unclear how far he is willing to go to welcome these Catholics into fully participating in the sacramental life of the church.

Finally, the Vatican noted that the threats to the family come from everywhere, including social media, with family members spending more time checking their smart phones and maintaining virtual relationships than with one another.

“The responses consistently mention how even a family’s leisure time is hijacked by these instruments,” it said.