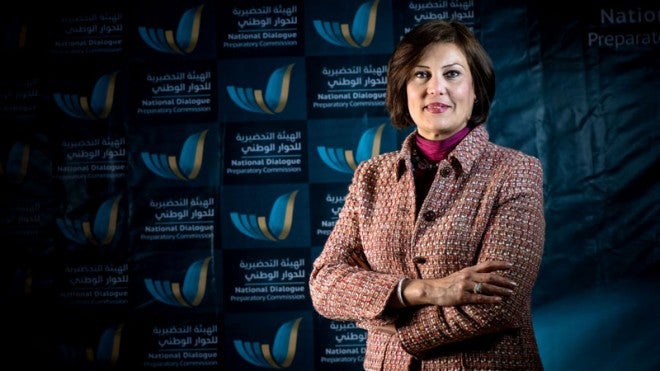 In this March 2014 image released by the National Dialogue Preparatory Commission, Salwa Bugaighis, lawyer and rights activist, poses for a photograph during a meeting in Tripoli, Libya. One of Libya’s most prominent female activists was assassinated in the restive eastern city of Benghazi when gunmen stormed her house, the state news agency reported Thursday, in slaying that stunned human rights advocates. Bugaighis, was at the forefront in the 2011 uprising against dictator Moammar Gadhafi. She was among the most outspoken voices against militiamen and Islamic extremists who have run rampant in the country since Gadhafi’s fall. (AP Photo/National Dialogue Preparatory Commission)

CAIRO — A prominent Libyan activist who had become an international face of her strife-torn country’s efforts to build a democracy was assassinated by gunmen who stormed her home in the restive eastern city of Benghazi shortly after casting her ballot in the country’s parliamentary elections, police said Thursday.

The slaying of Salwa Bugaighis stunned residents of her home city, politicians, activists and diplomats, among whom she was well known. International rights groups called on authorities to investigate, something many Libyans believe won’t be possible amid widespread fear of militias.

Bugaighis, a lawyer and rights activist, was at the forefront in the 2011 uprising against dictator Moammar Gadhafi. After his ouster, she became one of the most outspoken voices against militiamen and Islamic extremists who have run rampant in the country.

The identity of the gunmen was not immediately known. Islamic radical militias, however, have been blamed for frequent assassinations of secular activists, judges, moderate clerics, policemen and soldiers in Benghazi, Libya’s second largest city.

Bugaighis was shot in the head and stabbed multiple times on Wednesday night, just hours after casting her ballot, police spokesman Ibrahim al-Sharaa said. She was rushed to a hospital where she died of her wounds, he said.

Her husband, who is a member of the Benghazi municipal council and was also at home at the time, has disappeared since the attack and is believed to have been abducted, al-Sharaa said.

Earlier in the day, Bugaighis had been speaking by phone from her home on a Libyan TV channel about fighting raging near her neighborhood, sparked when militants attacked army troops deploying to protect polling stations.

On her Facebook page, she posted a photo taken out her window showing what appeared to be militants in fatigues with a black banner just outside her house.

“These are people who want to foil elections,” she told Al-Nabaa network as rattling gunfire interrupted her call. “Benghazi has been always defiant, and always will be despite the pain and fear. It will succeed.”

In the evening, five gunmen broke into her home, the house’s guard told police, according to al-Sharaa. They first asked about her son Wael, then shot the guard in the leg, and broke into the house. The guard said he heard gunfire from inside.

Bugaighis’ house is located in an area where two powerful Islamic militias are operating — Rafallah Sahati and Ansar al-Shariah, according to al-Sharaa. The latter is a prime suspect in the Sept 11, 2012 attack on a U.S. diplomatic facility in Benghazi that killed the ambassador and three other Americans.

Bugaighis had only just come to Benghazi from the capital, Tripoli, to cast her ballot, Hanaa Mohammed, a family friend, told Libya Ahrar TV. She had fled with her family some time back to Jordan because of death threats against them. The son, Wael, survived an abduction attempt earlier in the year.

More recently, she and her husband came back and were staying in Tripoli, though their two children — including Wael — remained in Jordan, a family friend said.

Hours after her killing, the headquarters of a 60-member panel tasked to draft the constitution came under attack by a car bomb in the eastern city of al-Baida, al-Sharaa said. No one was killed in the attack, but the historic building used under the monarchy as parliament’s headquarters suffered damage.

“I was deeply impressed by her courage, leadership and dedication to building a peaceful, democratic Libya,” Rice said.

Human Rights Watch paid tribute to Bugaighis and said that with her killing, “the original idealism of the 2011 uprising that overthrew Gaddafi’s tyranny has received another crushing blow, and many Libyan women have lost a role model.”

The European Union and United Nations missions in Libya also expressed shock and condemnation, and Amnesty International called on authorities to investigate.

Bugaighis was a well-known figure in Benghazi, where her family is among the oldest and most prominent. Since the civil war, she has represented Libya at international conferences.

During Gadhafi’s rule, she represented families of prisoners in Tripoli’s notorious Abu Selim prison, pressing the government for the truth of what happened to 1,200 prisoners who disappeared, most of them Islamists from Benghazi.

Bugaighis was a member of the National Transitional Council, the rebels’ political leadership body during the 8-month civil war against Gadhafi. Since then, she was deputy head of the National Dialogue Preparatory Commission, which is trying to work out reconciliation among the country’s rival factions, tribes and communities.

“All supporters of the truth are threatened,” said Hassan al-Amin, another prominent activist and former head of the human rights committee in parliament, who fled abroad because of death threats.

Libyans voted on Wednesday in the country’s second parliament elections, hoping for stability after three years of chaos.

During her interview with Al-Nabaa, as shelling hit her neighborhood and smoke rose nearby, she urged people to vote, saying she hoped for a new parliament without the current domination of Islamists.

“I call upon our people in Benghazi to be steadfast and patient because elections must be accomplished.”