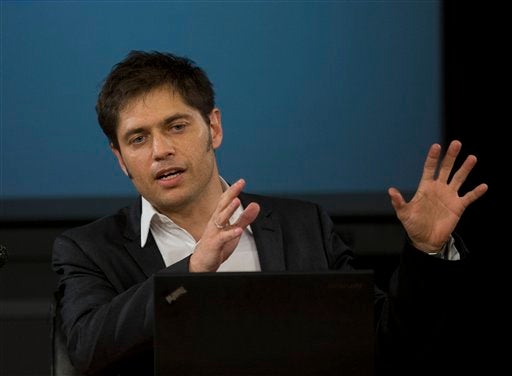 NEW YORK—A high-stakes showdown over Argentina’s defaulted debt moved back to a New York federal courtroom Wednesday, June 18 as lawyers for the South American government sought to delay or avoid complying with a judge’s final order, even after it was allowed to stand by the U.S. Supreme Court.

Argentina has until June 30 to pay a group of U.S. hedge funds an initial down-payment of $907 million on the $1.5 billion judgment. If it fails to comply, it will be unable to use the U.S. financial system to pay an equal amount to a much larger group of bondholders, provoking a disorderly default on their bonds, collectively worth $24 billion.

That larger group represents the 92 percent of investors who were already defaulted on once, when Argentina’s economy collapsed in 2001, and who exchanged their worthless paper for new bonds at much lower face value, providing the country with debt relief that allowed its economy to rebound.

President Cristina Fernandez and her economy minister Axel Kiciloff defiantly announced after Argentina’s final appeal was turned away by the Supreme Court Monday that rather than comply with the orders of U.S. District Judge Thomas Griesa, they will try to engineer yet another bond swap beyond the reach of U.S. law.

That effort is likely doomed from the start, many analysts said Wednesday, but as both sides gather before the judge to begin negotiations in earnest, it was seen as one of the few cards the government still holds in a poker game whose stakes couldn’t be higher for Argentina.

Whether the judge and the hedge funds — led by New York billionaire Paul Singer’s NML Capital Ltd. — call Argentina’s bluff could be determined Wednesday. Argentina would then have to show its cards, either agreeing to pay the judgment, or to disrupt its scheduled June 30 payments to the much larger group of bondholders, a move that could provoke a series of damaging consequences for the already fragile economy.

Calling Argentina’s bluff could be dangerous, analyst Daniel Kerner at Eurasia Group warned. It clearly wants to negotiate, but “the government is willing to default and has limits as to how much they can concede,” he said.

Adding to the pressure, the Supreme Court also ruled that federal law does not protect Argentine assets around the world from being disclosed to plaintiffs seeking to recover money from the South American government. Even military vessels like the tall ship “Libertad” and the presidential “Tango One” airplane would be subject to disclosure, and possibly seizure, if judges decide that Argentina is a deadbeat.

Fernandez and Kiciloff said they can’t possibly pay the plaintiffs cash in full plus interest, as the US courts have resolved. The plaintiffs represent about one percent of the $100 billion in debt that went into default more than a decade ago. Giving them the complete satisfaction the judge has ordered would end any hopes Argentina might have of reducing the $15 billion they say is owed to all the others whose pre-2002 bonds remain unpaid.

Instead, Kicillof said Tuesday that the government is “starting to take steps to begin a debt swap” to service the country’s restructured debt in “Argentina and under Argentine law.” Effectively, it would mean offering new bonds, denominated in dollars but without the protection of the U.S. courts — to the investors who accepted restructured debt in 2005 and 2010 that now totals $24 billion.

Analysts said the plan is doomed. About 85 percent of the creditors would have to approve it, said Matias Carugati, an economist for Buenos Aires-based consultancy, Management & Fit. Internal rules of many investment funds rule out such a shift, and many others would be reluctant to rely on Argentine law, “which for them would be like entering a risk zone.”

In her speech to the nation Monday, Fernandez vowed to defy what she called extortion by the holdout bondholders. But she said her government “will not default on those who believed in Argentina” by accepting the debt swaps, and she also expressed hope that 100 percent of the holders of Argentine debt will agree to new payment plans, opening the door to negotiations.

Argentina has made tremendous efforts to return to global credit markets that have shunned it since the default. The government paid its debt to the International Monetary Fund, and agreed in May with the Paris Club of creditor nations on a plan to begin repaying $9.7 billion in debts unpaid since 2001. It also agreed to a $5 billion settlement with Grupo Repsol after seizing the Spanish company’s controlling stake in Argentina’s YPF oil company.

Economists, political analysts, opposition politicians and everyday Argentines were pleading with the government on Wednesday to reach a deal that avoids another devastating default.

“Another default can be quite costly economically and financially,” said Alberto Ramos, Latin America economist for Goldman Sachs. “And the uncertainty and volatility that would generate would put added pressure on an already struggling economy, on the exchange rate, and therefore also on reserves.”

Many public works projects including new highways and rail systems that the government has repeatedly announced are already frozen for lack of cash and available credit. A default could mean even less money available, costing jobs, said Fausto Spotorno, an economist with the Orlando Ferreres & Asociados consultancy.

Argentines holding inflationary pesos have spent money on cars and televisions to keep their earnings from disappearing. But for many people deciding whether to invest in a business or make even short-term financial commitments, the simple threat of a disorderly default that could hasten capital flight and cause higher unemployment is a big reason not to take risks.

“This is catching us at a very weak time in our economy — with high inflation, low central bank reserves,” said Nicolas Gadin, a 40-year old lawyer living in Buenos Aires. “I don’t know how this is going to be resolved but I’m sure the regular Argentines, we’re going to come out of this losing.”

Your subscription could not be saved. Please try again.
Your subscription has been successful.
Read Next
A look at child immigrant holding cells
EDITORS' PICK
Only 38% of students grade 1 to 3 prefer local language as medium of instruction — Pulse Asia
House energy committee chair Arroyo bats for cheap electricity
Philippines central bank to focus on inflation at next policy meeting – governor
Omega Speedmaster super racing: Tiny device massive change
vivo Philippines offers a free bouquet of flowers and a premium necklace perfect for Valentine’s Day
ACT slams Edca on 124th anniversary of PH-American war: ‘Tila hindi umalis ang mananakop’
MOST READ
Philippines’ own ‘Anna Delvey’ arrested in Taguig City
Pokwang admits she lied about cause of split with Lee O’Brian: ‘Umasa akong aayusin pa niya’
Vice Ganda asserts all is well with Karylle, takes swipe at ‘kuya’ who chimed in to be ‘trending’
OWWA chief Arnell Ignacio: Socmed manager behind post on my love life
Don't miss out on the latest news and information.