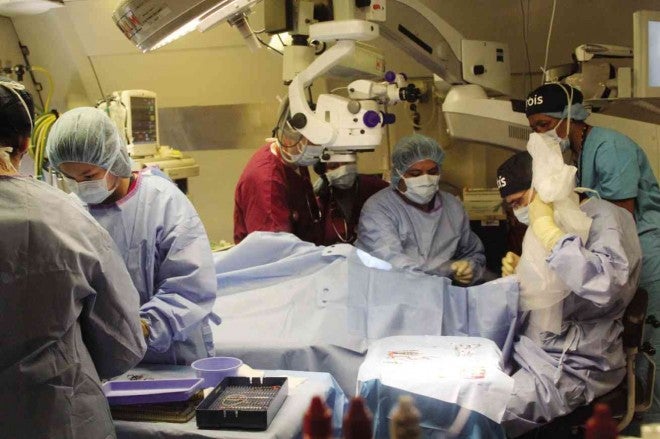 SURGEONS operate on a patient inside Orbis Flying Eye Hospital, a DC-10 plane that has been transformed into a hospital and school for ophthalmologists. TONETTE T. OREJAS/INQUIRER CENTRAL LUZON

CLARK FREEPORT—It’s a plane, hospital and  school rolled into one. And it’s the only one of its kind in the world.

Called Flying Eye Hospital (FEH) of the Orbis humanitarian organization, the DC-10 aircraft has been coming to the Philippines since 1982, said Dr. Ahmed Gomaa, the program’s medical director, at the start of a two-week surgical and training mission here on Tuesday.

Gomaa said at least 3.9 million Filipinos were visually impaired and some 600,000 of them were blind due mainly to cataract.

This is the 13th time that Orbis FEH has toured the Philippines, care of FedEx, said Maribeth Espinosa, senior manager for customer service of the cargo forwarding firm. FedEx, she said, has been a partner of Orbis for 30 years.

Globally, Orbis has visited 78 countries, doing 287 training and service programs in 160 cities as of December 2012.

Parked at the Clark International Airport here on Tuesday, a section of the plane, near the cockpit, is a classroom where Filipino ophthalmologist Manolito Reyes held lectures on glaucoma for 20 young doctors.

Reyes, assistant professor of ophthalmology at Far Eastern University Institute of Medicine, is part of a staff of 15 volunteers from the Philippines, the United States, India, Ireland, Israel and the United Kingdom doing the training from June 23 to July 4.

In an adjacent area, Alicia Malig was waiting for her turn to undergo a laser procedure on her retina. Her sight, she said, has been blurred by diabetes.

In the next room, a 6-year-old boy just underwent an operation for glaucoma, which is rare among children. Of about 925,000 surgeries done by Orbis, at least 198,000 were on children.

Several people were lined up for surgery on the plane. Other operations will be held at Jose B. Lingad Memorial Regional Hospital (JBLMRH) in the Pampanga capital of San Fernando, said Dr. Yolanda Lee, JBLMRH chief.

“I wish the Orbis plane would park yearly at Clark so that your noble undertaking could always reach the Filipino people,” said Victor Jose Luciano, president of the Clark International Airport Corp.

Since 1982, Orbis has provided treatment to more than 1,000 Filipinos who are blind and who have poor vision, Gomaa said, adding that it has also trained over 1,000 eye-care specialists.

The training aims to improve the capabilities of eye doctors in providing proper, affordable and accessible care, he said.

Dr. Manuel Agulto, founding organizer of Central Luzon Society of Ophthalmologists and chancellor of the University of the Philippines Manila, said more eye doctors were needed in the Philippines.

“The problem is [uneven distribution]. More doctors are in urban areas than in rural areas,” he said.