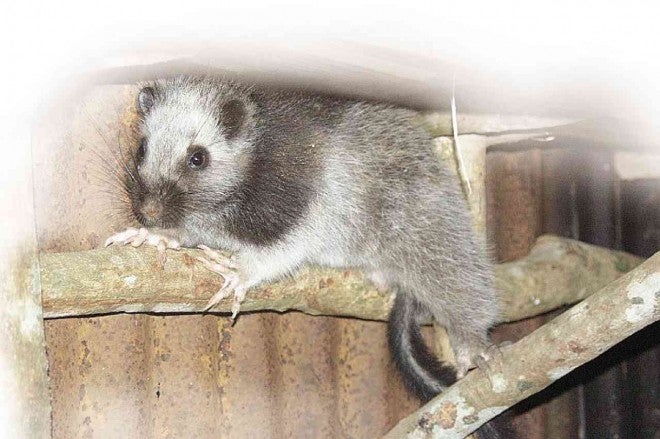 LOCALLY called “paroot,” cloud rats which are found in Tanay, Rizal province, are among the critically endangered species endemic to the Philippines. PHOTO COURTESY OF TANAY ENVIRONMENT AND NATURAL RESOURCES OFFICE

Tanay town in Rizal province is taking the lead in the preservation of cloud rats, an endemic species listed as critically endangered, as it embarks on a six-month massive watershed reforestation program.

Locally called “paroot,” the cloud rats (Phloeomys pallidus) are nocturnal rodents endemic to Philippine forests and are known to be slow breeders.

“Only one young is born per year so their population grows really slow,” according to municipal environment officer Carlos Inofre Jr. Inofre said his office had yet to figure out their current population.

Sightings of cloud rats have been reported in the Sierra Madre mountain ranges and in some parts of the Visayas, but there has been no concrete program to preserve the species.

“We’ve been getting reports of sightings here (in Tanay)

—lamentable reports because they are either captured or have already been eaten,” Inofre said in a phone interview on Monday.

“It looks like a rabbit with a tail. A mature paroot weighs as much as two to three kilograms and from what I heard, its meat is tasty,” he said. They have become a delicacy among indigenous communities, he added.

Unlike ordinary rodents, cloud rats do not spread diseases or pose threats to humans. In Tanay, they thrive in upland villages, feeding on leaves and nesting inside tree hollows.

To protect their habitat, Tanay, 57 kilometers east of Manila, is reforesting the Kaliwa Watershed, Upper Marikina River Basin and the Tanay Micro-watershed. On June 21, thousands of people joined a 3-km Alay Lakad (Walk for a Cause) around the town plaza during the launching of the program.

The first-class municipality was able to raise at least P103,000 from the P10 individual registration fee to Alay Lakad. The money will be used to buy tree seedlings grown by indigenous communities, Inofre said.

“We’re buying the tree seedlings from the IPs (indigenous peoples), as an alternative livelihood for them since logging and charcoal-making were banned here,” he said.

Tanay plans to reforest 40 hectares of land, beginning with a tree planting on June 25 in commemoration of National Arbor Day. The activity will be held every week until December.

A proposed ordinance is also being finalized to outlaw the hunting of cloud rats and to build a paroot sanctuary to assist natural breeding, Inofre said.