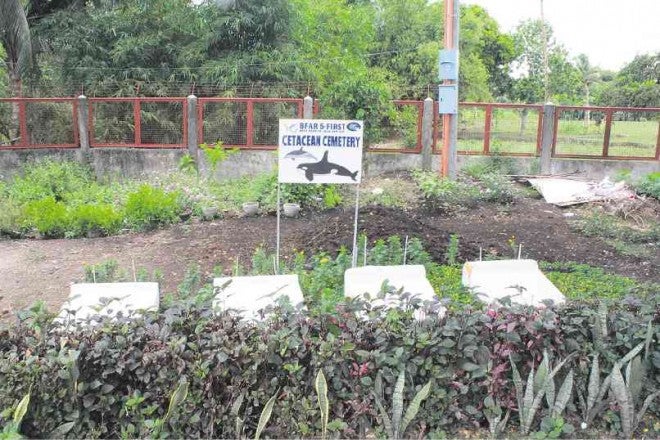 A CEMETERY for marine mammals inside the compound of the Bureau of Fisheries and Aquatic Resources in Fabrica, Bula, Camarines Sur, cradles the remains of dolphins and whales marked by tombstone-like structure. At the back, a fresh mound for the reef manta ray buried on June 6. JUAN ESCANDOR JR.

BULA, Camarines Sur—If there is a cemetery for humans and even pets, endangered marine species large enough to be hauled on big trucks could also have their “final resting place.”

Dennis del Socorro, director of Bureau of Fisheries and Aquatic Resources (BFAR) in Bicol, said a cemetery for cetaceans has been established inside the 15-hectare compound of BFAR in Barangay Fabrica in Bula town, Camarines Sur.

He said the cemetery was meant to raise awareness about endangered or threatened mammals like whales and dolphins and other marine species.

“By establishing the cemetery for these sea creatures we convey marine mammal protection and conservation and raise the level of awareness on marine flagship species to the people visiting our office,” he said.

Nonie Enolva, marine biologist and chief of the response team, said the carcasses of two whales and two dolphins were buried in the cetacean cemetery.

Enolva said the reef manta ray was accidentally entangled in a fishing net owned by small fishermen in Pilar town, Sorsogon province. It was turned over to the local government unit there and reported to the team.

She described the reef manta ray as a female, which spans 4.15 meters in width.

One of its two rostrums—protrusions on the left and right sides of the mouth that guide its feeding—was not there anymore.

Enolva said BFAR veterinarian Evelyn Saberon conducted a necropsy on the carcass of the reef manta ray and found that its internal organs were in good condition.

Saberon declared the cause of death of the manta ray as deprivation of dissolved oxygen caused by entanglement in the net.

“The manta could be one of those which aggregate in Ticao Island’s manta bowl, fronting Pilar town,” said Enolva.

She said one of the carcasses buried at the cetacean cemetery was that of a pregnant dwarf sperm whale, which was found dead by the fisherfolk of Barangay San Rafael in Ragay town, Camarines Sur province.

Enolva said they were able to recover a fully grown fetus with its umbilical cord intact, which they have preserved as laboratory specimen for educational and research purposes.

She said they pushed for the establishment of the cetacean cemetery in Bicol after stranding cases grew through the years.

Enolva said BFAR welcomes academe or research institutions seeking to excavate the bones of dolphins, whales and manta ray for reconstruction and display in their premises.