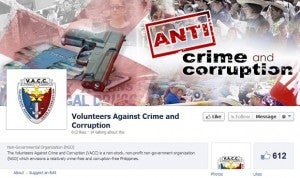 MANILA, Philippines – It was just like any other shooting competition except that in this one, the participants trained their guns literally on “plunderers,” “murderers,” “rapists” and other types of criminals.

Members of the Volunteers Against Crime and Corruption honed their target-shooting skills Saturday in a shootfest with a twist — by spelling out various types of criminals on their target boards instead of the usual circles and bull’s eye.

Gun enthusiasts keenly trained their eye on such words as “plunderers,” “murderers,” “carnappers,” “rapists,” and “drug traffickers” and pulled the trigger to vent their anger.

“These people are the culprits who victimize us, the victims. It’s about time we protect ourselves against them,” said VACC founding chairperson Dante Jimenez.

Some 100 VACC members who joined the shootfest at the Camp Crame firing range on Saturday to polish their skills with guns and show they are fed up with rampant crime.

“With heinous crimes on the rise, we must emphasize that we must now protect ourselves and our families. We should be also responsible gun owners,” Jimenez added.

Originally, the VACC planned to shoot actual photos of criminals but organizers were talked out of it.

Asked about the meaning of their unusual targets, Jimenez said such criminals should be held accountable in the courts.

“We want people not to forget that these criminals are just around the corner, waiting to strike, and they should be prevented from doing harm,” he said.

“Some own guns for self preservation, some see it as a hobby. They practice on their own, independently,” he said.

The shootfest has been an annual activity of the organization for 16 years now although it was the first time that it was held in Camp Crame.

VACC to police: Don’t be afraid to arrest 3 senators