MANILA, Philippines – Senator Ramon “Bong” Revilla Jr. started his first full day in detention Saturday with breakfast of rice porridge and egg, lunched on fish stewed in vinegar (paksiw ina isda) and will be having sauted chayote for dinner, a spokesman for the Philippine National Police said. 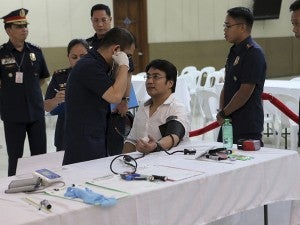 In this photo released by the Philippine National Police Public Information Office, Sen. Ramon Revilla Jr. undergoes a medical checkup as part of a police booking process before he is brought to his detention cell in Camp Crame police headquarters, north of Manila, Philippines on Friday June 20, 2014. Revilla, also a popular action movie star surrendered after the anti-graft court ordered his arrest on large-scale corruption charges in a rare spectacle of the country’s high and might being made to answer for alleged misdeeds. AP/Philippine National Police Public Information Office

Cavite Representative Lani Mercado, Revilla’s wife and children, visited the senator and brought food and a cooler after he complained of heat in his cell at the PNP custodial center, said Chief Superintendent Reuben Theodore Sindac.

Revilla has been detained at the PNP since Friday when he gave himself up to the Sandiganbayan, which issued an arrest order after the anti-graft court found probable cause on the plunder and graft charges that were filed against him for his alleged misuse of pork barrel funds appropriated to him as a senator.

Mercado visited Revilla Saturday despite the PNP’s pronouncements that the senator’s family and friends were only allowed to visit him on Thursday and Sunday from 9 a.m to 3 p.m. and that only Revilla’s physician, lawyer and spiritual adviser were allowed to visit anytime of the day.

When asked about Mercado’s visit, Sindac clarified that the PNP was still finalizing the visitation hours for the detained senator.

Aside from Mercado and his children, Revilla was also visited by lawyer Salvador Panelo, who said he was visiting as a family friend.