Violence in Iraq hikes gasoline prices in US 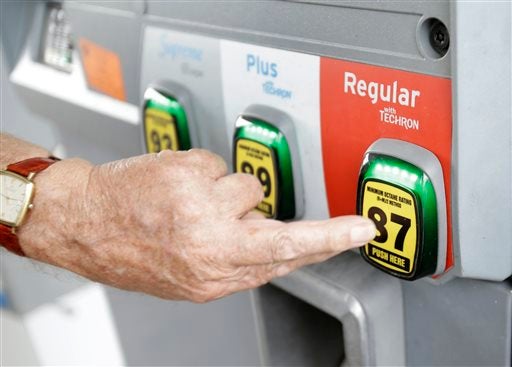 In this Wednesday, June 4, 2014, photo, Marty Mascio of Pembroke Pines, Fla., selects a grade of gasoline as he fills up his car at a Chevron station in Pembroke Pines. Violence in Iraq is pushing US gasoline prices higher during a time of year they usually decline. AP PHOTO/WILFREDO LEE

NEW YORK—Violence in Iraq is pushing US gasoline prices higher, depriving drivers of the usual price break between Memorial Day and July Fourth.

The national average price of $3.67 per gallon is the highest price for this time of year since 2008, the year gasoline hit its all-time high.

“You are going to pay a little more than we thought you were going to pay,” says Tom Kloza, chief oil analyst at the Oil Price Information Service and GasBuddy.com. “But you are not going to see any apocalyptic numbers.”

Gasoline prices typically fall in the weeks following Memorial Day, after supplies increase enough to fill up the cars of the nation’s vacationers as summer approaches.

This year, drivers are paying more. The average has risen every day for a week, and is now higher than it was on Memorial Day— with more increases sure to come.

Even before violence in Iraq broke out, this year’s predicted decline was slower than expected because of rising US fuel demand and extensive maintenance at some Gulf Coast refineries that reduced gasoline output.

Then, last week, Iraqi insurgents seized a pair of cities and pledged to attack Baghdad. None of Iraq’s oil fields were targeted, most are far away from the fighting, and oil exports have continued to flow. But Iraq is Opec’s second-largest exporter, so worries that oil production might be impacted was enough to send global oil prices higher by 5 percent over the last week.

The average price of gas rose 3 cents per gallon during the past week, and analysts expect more increases over the next couple of weeks.

How the situation in Iraq plays out is impossible to predict, but analysts note that the global market is well-supplied with oil and fuels. Morgan Stanley wrote in a recent report that the potential for a significantly higher sustained oil price was “limited without a major disruption,” and that “the conflict will likely be contained primarily North of Baghdad, limiting the impact on oil exports.”

But drivers in 15 states are already paying more for gas than they have since March of 2013, according to Kloza. The national average will likely soon surpass this year’s high of $3.70 per gallon, set on April 28.

And the chances of the average crossing the $4 mark?

“The (last place) Mets have a better chance of winning the World Series,” he said.