De Lima on Revilla probable cause finding: It’s a validation 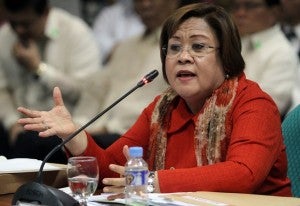 MANILA, Philippines–Justice Secretary Leila de Lima described as “good news” to the Department of Justice, the National Bureau of Investigation and to prosecutors the Sandiganbayan’s finding of probable cause to charge Sen. Bong Revilla with plunder.

“It’s just a validation, a reaffirmation of the finding of probable cause… and we don’t see any reason that this would (be the same result) in the two other cases,” De Lima said, in reference to the plunder cases of Senators Juan Ponce Enrile and Jinggoy Estrada, which are pending in the Sandiganbayan for judicial determination of probable cause.

But Revilla filed his petition for certiorari and prohibition with prayer for a temporary restraining order and/or preliminary injunction on June 17, or a day after the high court’s en banc session.

Revilla also wanted the high court to annul and set aside the information of plunder and graft filed by the Ombudsman in the Sandiganbayan.–Christine O. Avendaño