MANILA, Philippines—”Mental torture” was how Senator Jose “Jinggoy” Estrada described his current state of mind while waiting for his arrest.

“Torture, mental torture. We don’t know if the warrant of arrest will come out tomorrow, next week or a week from now,” Estrada said in mixed English and Filipino during the weekly “Kapihan sa Senado” on Thursday when asked how he felt that warrant of arrest would be issued against him.

Despite the mental torture, Estrada said he was not losing sleep over it.

The senator though admitted that the “fear is always there.” 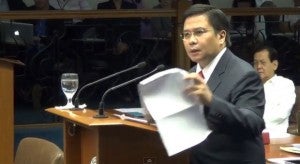 (The mere fact that I am going to get jailed again, I am getting goose bumps again. I am just thinking about my children.)

Estrada, who has been charged with plunder and graft in connection with the “pork barrel” scam, has already arranged his surrender to the head of Criminal Investigation and Detection Group, Director Benjamin Magalong.

Estrada said Magalong would call him once the warrant of arrest is out.

And once the arrest warrant is issued, the senator said he would no longer wait for the police to come to him as he would voluntarily go to Camp Crame.

The senator said he would just ask the police to give him leeway—an hour or two to prepare and take a bath–before going to the Crame.

Estrada said his parents–former President and now Manila Mayor Joseph Estrada and former Senator Loi Estrada–and his wife might accompany him to the police.