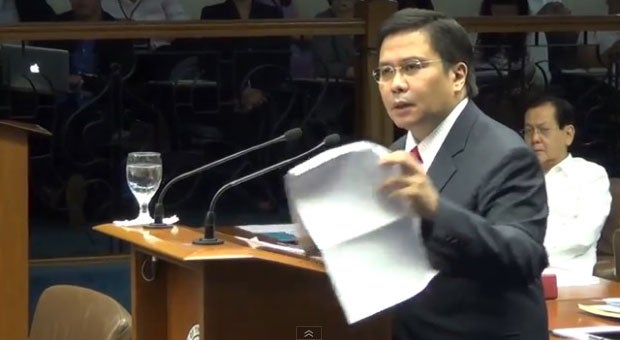 Sen. Jinggoy Estrada, delivering his privilege speech Wednesday, said he would go on a short leave but promised to return to the Senate soon. INQUIRER.net photo

MANILA, Philippines–Sen. Jinggoy Estrada, facing arrest for a plunder case in the Sandiganbayan in connection with the alleged P10-billion pork barrel scam, on Wednesday said he would go on a short leave, promising to return to the Senate soon.

Estrada used the last day before Congress went on adjournment sine die to bid goodbye to his family, colleagues, friends and the nation as he vowed to fight the plunder case.

The senator said he was pinning his hopes on the fairness and justice of the Supreme Court and the Sandiganbayan because the Department of Justice (DOJ) and the Office of the Ombudsman had denied him these.

“The fight is not yet over. It has just started….I will prove that I was not remiss in my duties and did not abuse my position,” Estrada said in a privilege speech he delivered on the last session day in the Senate.

It was Estrada’s third privilege speech since the government tagged him last year as among the senators who misused their Priority Development Assistance Fund (PDAF) and charged him in the Office of Ombudsman with plunder and graft. Last week, the Ombudsman indicted him for plunder in the Sandiganbayan.

His speech came two days after his coaccused, Sen. Ramon Revilla Jr., delivered his own privilege speech defending himself from the plunder charges.

In his speech, Estrada slammed the administration of President Aquino, the Commission on Audit (COA) and DOJ for the “selective investigation” of the pork barrel scam said to be masterminded by Janet Lim-Napoles, who like Estrada has been charged with plunder in the Sandiganbayan.

He slammed COA Chair Grace Pulido-Tan for mentioning his name and that of Revilla and Sen. Juan Ponce Enrile in her agency’s special audit report on the PDAF from 2007 to 2009 when there were hundreds of lawmakers who were identified in the report.

Estrada asked why House Deputy Speaker and Mandaluyong Rep. Neptali Gonzales III, Aquino’s party mate, was not among those charged when the latter was named in the COA special audit report.

He also took issue with the speed by which Justice Secretary Leila de Lima filed the plunder cases against him and the others just two months after the media reported the pork barrel scam.

Estrada wondered why the justice secretary had not filed other cases against those also involved in the alleged scam.

The senator also slammed De Lima’s move to seek the cancellation of his passport and those of others after the DOJ filed the case in the Office of the Ombudsman, saying this was a violation of the Constitution and of their right to travel.

Estrada also hit Ombudsman Conchita Carpio Morales for her “selective prosecution” and bias against those charged through her statements in the media about the investigation.

These included Morales’ statement that she believed the three senators were “probably guilty” and that her office had enough evidence against the lawmakers after she issued the resolution finding probable cause to indict them for plunder.

Estrada described as a “lame excuse” Morales’ proposal for the Supreme Court to create special courts in the Sandiganbayan to ensure a speedy trial of the pork barrel cases.

He said this was an attempt to handpick the men and women who are disposed to convict him and the others.

“I am very sure that what the Ombudsman really wants is not a speedy trial but a ‘speedy convicting court,” he said.

Estrada added that Morales denied his request for copies of the counteraffidavits of the witnesses against him “for lack of cogent basis” and yet she used these against him.

The senator did not spare the Senate blue ribbon committee, which investigated the Napoles scam, slamming its chair, Sen. Teofisto Guingona III, for prejudging the case and other committee members for repeatedly mentioning “Tanda,” “Sexy” and “Pogi”—the monikers that the whistle-blowers used to refer to them—“as if they were gleeful at us.”

Also not spared were some media outlets that Estrada said did selective reporting on the pork barrel scam and highlighted the three senators in their coverage.

Still, he said that while he and the others had failed to get fairness and justice from the Senate, the DOJ and the Ombudsman, he strongly believed that they would get these from the Supreme Court and the Sandiganbayan.

Estrada said he may be absent at the start of the second regular session of the 16th Congress in July, in apparent reference to the fact that he may have been arrested and detained on orders of the Sandiganbayan by then.

“For a rare and limited period, I would be absent from the Senate. But it would be brief as I would return,” he said.

Estrada said he had no plans of dodging the accusations against him, reiterating that he was not afraid of going to jail.

Bidding goodbye to his family, he assured his father, former President and now Manila Mayor Joseph Estrada, not to worry because he could handle the situation.

He said he would have wanted to spend more time with his father, given that he was not getting any younger but promised he would make up for it.

He told his wife, Precy, to be strong for their children as he asked for her forgiveness for the pain caused by the challenges facing them. He said he would have wanted to renew their marriage vows on their 25th anniversary but it was not to be.

“It once happened to me, but I was proven innocent. I will prove again that the things they want me to admit are without bases,” he said.

“Lastly, I want to stress that I am not a thief,” he said.

Aside from his wife, Estrada’s siblings Jackie and Jude were in the Senate to provide moral support.