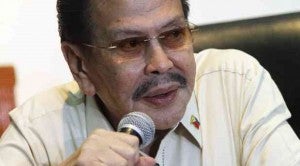 MANILA, Philippines – Former president and Manila Mayor Joseph Estrada on Thursday insisted on the innocence of Senator Jose “Jinggoy” Estrada but admitted that his son had been careless in the allocation of his “pork barrel.”

“He was just careless,” Mayor Estrada told Karen Davila during an interview on ANC’s Headstart. “He doesn’t have that intention to take advantage of his PDAF (Priority Development Assistance Fund).”

He said the senator most likely accommodated those who asked for access to his PDAF and directed his secretary to deal with them.

“That’s what I did when I was a senator,” the former president said.

Mayor Estrada insisted that it was the responsibility of the implementing agencies to check if the non-government organizations are real or fake.

“And then before the release it will again be examined by the Department of Budget. So they are the ones who should see to it where the money is going,” he explained.

Asked if he agreed on the designation of special courts for the plunder case faced by his son and other co-accused, Mayor Estrada said, “All special courts are created to convict anyone.”

He also claimed that Ruby Tuason, his former aide who testified against Senator Estrada before the Senate, was coached. Mayor Estrada said Tuason was only trying to save herself.

He insisted that his son did nothing wrong and that cases could have been set up by the administration in a bid to blame the senators for the channeling of public funds to bogus NGOs.

“He’s still young. Once he gets by these problems, he can still go back,” he said of his son.

Mayor Estrada himself had successfully orchestrated the revival of his political career. From being a well-loved actor and candidate of the masses to being impeached and convicted of plunder, he later saw vindication after winning the coveted Manila mayoral seat.

‘Jinggoy’ Estrada: I will surrender to my father