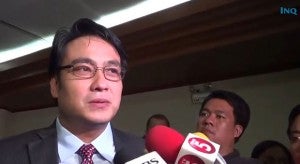 The division chaired by Associate Justice Efren Dela Cruz said the anti-graft court could not suspend proceedings without a restraining order from the Supreme Court.

But the court said they would still determine the judicial determination of probable cause, which would be basis to issue an arrest warrant.

In their motion, Revilla’s camp had said the Sandiganbayan should suspend proceedings because the senator has also filed a civil case against scam whistleblowers in Bacoor, Cavite, which he said should have precedence over the criminal case.

Bodegon said it should not be Revilla but the whistleblowers who should be charged because they admitted of forging transaction documents. Also, he said Revilla did not benefit in kickbacks.

Bodegon also told the court that the proceedings should be suspended pending the Supreme Court’s decision on the Ombudsman’s request for the creation of special divisions in the Sandiganbayan to exclusively hear the case.

But the prosecution said proceedings should not be suspended on that basis because the Supreme Court has said the anti-graft court may continue with the proceedings pending its decision.

Associate Justice Dela Cruz declared that they would continue proceedings especially without a restraining order by the Supreme Court.

“Unless the court is restrained by the Supreme Court, we will proceed with the proceedings. Therefore, we deny the motion to suspend proceedings,” Dela Cruz said.

The Ombudsman in indicting Revilla said the movie actor-turned-senator collected P224.512 million in kickbacks from 2006 to 2010 from the alleged illegal disbursement of his PDAF.

Revilla faces one count of plunder and 16 counts of graft.

The pork barrel scam is an elaborate scheme of allegedly diverting billions of PDAF to ghost projects for kickbacks. With reports from Nestor Corrales, INQUIRER.net and Radyo Inquirer 990AM