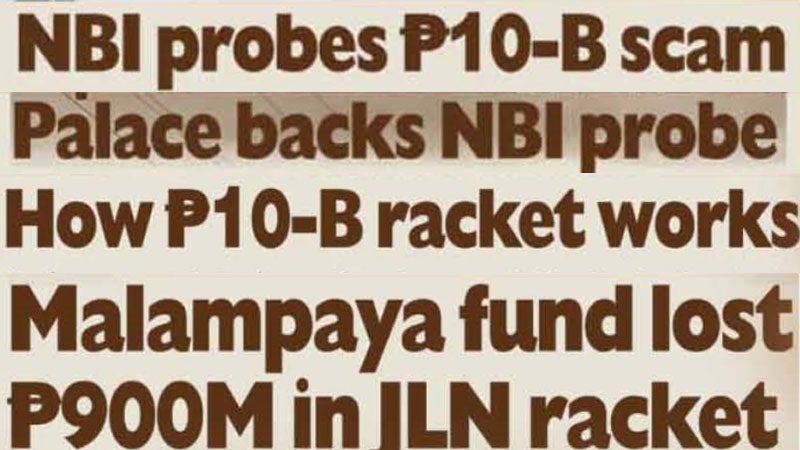 READ ALL ABOUT IT The headlines that unraveled the systemic and widespread corruption involving pork barrel funds of lawmakers, starting with the Inquirer series last year and culminating in Friday’s filing of plunder charges against nine persons, the first batch to be formally charged since the Department of Justice and the National Bureau of Investigation filed plunder charges against them and 29 others last year.

Seven weeks before President Benigno Aquino III makes his annual report to the nation, the Ombudsman on Friday indicted Senators Jinggoy Estrada, Juan Ponce Enrile and Ramon Revilla Jr., businesswoman Janet Lim-Napoles and five others in the Sandiganbayan for plunder over the P10-billion pork barrel scam.

It was the biggest and highest profile case to be brought by the administration of President Aquino to court since he was elected to office in 2010 on an anticorruption platform.

These nine individuals constitute the first batch to be formally charged by the Ombudsman since the Department of Justice and the National Bureau of Investigation filed plunder charges against them and 29 other people last year.

The three senators and Napoles, the alleged brains behind the pork barrel scam, and five other people stockpiled a combined total of P581 million in kickbacks through the diversion of pork barrel funds to bogus foundations from 2004 to 2012.

Malacañang and the Senate leadership viewed the indictment of the three senators for plunder “as a step forward” in calling to account the people responsible for the massive fraud  that angered the nation after the Inquirer exposed it in a series of reports last year.

The public indignation exploded in a mammoth rally against official corruption at Manila’s Luneta Park on Aug. 26, 2013, and later, the abolition of the Priority Development Assistance Fund (PDAF), which Napoles, legislators and several government officials allegedly misused to amass ill-gotten wealth.

President Aquino promised to call to account all those responsible for the plunder of the PDAF, which, although derisively called pork barrel, channeled funds to projects for rural development.

He delivered on Friday.

The Ombudsman said additional charges would be filed against them next week for graft and corruption.

In the cover letters, the Ombudsman graft investigaton and prosecution officer accused Enrile, Revilla, Estrada, Napoles and their coaccused of plunder.

The Ombudsman accused the three senators of “conspiring” with their principal employees and Napoles and her henchmen of “willfully, unlawfully, criminally amassing, accumulating and/or acquiring ill-gotten wealth… through a combination of overt criminal acts.”

The Ombudsman claimed that Enrile, Revilla and Estrada or their staff officers “repeatedly received kickbacks or commissions before, during, and after project identification.”

In Enrile’s case, the Ombudsman charged that the former Senate president amassed P172.834 million from 2003 to 2010 in collaboration with Reyes, Napoles, Lim and De Asis.

In Revilla’s case, the Ombudsman said the movie actor-turned-senator collected P224.512 million from 2006 to 2010 in collusion with Cambe, Napoles, Lim and De Asis.

Estrada was accused of hoarding P183.795 million in commissions from 2004 to 2012 in connivance with Labayen, Napoles and De Asis.

While the case waits to be raffled off next week, Ombudsman Conchita Carpio Morales this early has asked Chief Justice Lourdes Sereno to create “at least two special divisions [in the Sandiganbayan] to exclusively try and conduct continuous trial” of the PDAF cases.

In her letter to Sereno, Morales cited as compelling reasons the “national magnitude of these cases, the complexities of the issues involved, the number of accused and the far-reaching consequences of these cases.”

Morales cited as precedent a Supreme Court decision in 2002 that ordered the creation of a special Sandiganbayan division to handle the plunder case of former President and now Manila Mayor Joseph Estrada and his coaccused.

‘A process we must accept’

Malacanang said the filing of charges against the three senators and their coaccused was “a step forward” in calling to account those responsible for the pork barrel scam.

“It is a step forward in the determination of the truth, which will be the basis for exacting accountability under our justice system,” Abigail Valte, deputy presidential spokesperson, said in a text message.

Senate President Franklin Drilon said the filing of charges against the three senators was “part of the constitutional and legal process, which we must accept.”

“The search for the truth may be painful, but this is a process that strengthens our government institutions and reinforces the trust and confidence of our people in our justice system,” Drilon said in a statement.

After all, he added, “[ours is] a government of laws, not of men. And no one is above the law.”

To face the charges

Estrada, Enrile and Revilla have consistently expressed readiness to face the charges in court.

“I will go wherever they want me to go and surrender,” Estrada said on Thursday, indicating he would not resist arrest.

But he could not be reached for comment yesterday after the Ombudsman filed charges against him.

“He’s saddened by the filing of the case,” said Joel Bodegon, a lawyer for Revilla.

Bodegon said in a phone interview that the Ombudsman filed the charges even after the Supreme Court ordered the antigraft watchdog to comment on Revilla’s petition for a “proper preliminary investigation.”

Bodegon said Revilla was to file a motion for judicial determination of probable cause and deferment of proceedings in the Sandiganbayan yesterday, but didn’t beat the deadline.

He said Revilla would comply with court orders, but wanted to “exhaust all legal remedies” first.

Enrile’s staff said the senator would not issue a statement.

Antipork barrel activist Peachy Bretaña, one of those who called last year’s Luneta march through social media, said she hoped the prosecutors would not let the cases get stuck and instead counter dilatory tactics that the accused could be expected to resort to.

The filing of the charges, she said, will appease the public’s anger “for the time being.”

She said she was looking forward to the arrest of all those charged in court.

In an interview earlier this week, presidential spokesperson Edwin Lacierda said the nation had been waiting for nearly a year for the filing of charges against the people responsible for the pork barrel scam.

“The people are waiting [for] the next step in this [search for] accountability,” Lacierda said. “It [has] to come from the Ombudsman.”

He added: “The decision of the Ombudsman, whoever will be [charged], moves us closer to accountability.”

Their day in court

“The Sandiganbayan will now hear and decide the case. The defense will be given its day in court to present its witnesses and evidence,” Drilon said.

“We hope that the Sandiganbayan will set the case for speedy trial so that the innocent will be cleared and freed, and the guilty punished and jailed,” he added.

Drilon urged the Filipinos to remain vigilant “so that speedy and impartial justice [will be] served.”

“Whatever the outcome, our government now has the opportunity to show that we have a functioning legal system that can render fair, speedy and impartial justice,” he said. With a report from Leila B. Salaverria

Aquino: Estrada has some explaining to do