Aquino: Estrada has some explaining to do | Inquirer News
Close
menu
search

Aquino: Estrada has some explaining to do

The President on Thursday confirmed receiving Napoles’ April 17, 2013, letter to him decrying her family’s alleged harassment by the National Bureau of Investigation over the detention of her chief aide, Benhur Luy.

But Aquino suggested that Estrada could shed light on the supposed extortion attempt.

“Basically, she’s saying she’s innocent, and that they have been legitimate businessmen for the past 29 years. And now they’re being harassed by the NBI. That’s the gist,” he told reporters after speaking at the Asia-Europe Meeting (Asem) conference on disaster risk reduction in Manila.

In essence, Napoles’ letter was “self-serving,” he concluded.

No notes on letter’s margins

Malacañang released to reporters a purported copy of the two-page letter which bore the stamp “received” by the Office of the President. It has a five-page attachment, including a synopsis of the events leading to the raid on Napoles’ condominium unit, and pictures of the NBI raiding team. There are no notes written on the margins of the letter the reporters got.

At the Commission on Appointments proceedings in the Senate on Wednesday, Estrada grilled Justice Secretary Leila de Lima on a host of issues, including a purported Napoles letter to Aquino.

He asked about Aquino’s action on the letter, as well as his purported marginal notes in the letter. He asked De Lima to produce the letter next week when the commission resumes its proceedings on her confirmation. 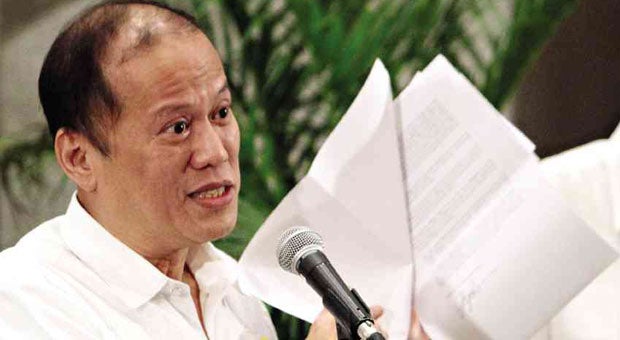 THE LETTER President Aquino shows the media the letter of Janet Napoles to him on the sidelines of the Asia-Europe Meeting Conference. The letter has no marginal notes as Sen. Jinggoy Estrada alleged during the confirmation hearing of Justice Secretary Leila de Lima on Wednesday. GRIG C. MONTEGRANDE

After confirming it was Estrada who brought up the letter at last Wednesday’s confirmation session of De Lima, the President produced the letter during the ambush interview.

Then he read the fourth paragraph where Napoles alleged that Luy’s then lawyer, Levito Baligod, together with retired Gen. Rodolfo Diaz, demanded P38 million from her lawyer Freddie Villamor in exchange for the dropping of serious illegal detention charges against her.

Luy was rescued by NBI agents in Napoles’ condominium unit in Bonifacio Global City in Taguig City in March 2013. He has since turned whistle-blower of the P10-billion pork barrel scam allegedly orchestrated by Napoles.

“Maybe Senator Jinggoy would know more about this,” he added.

In an interview with Senate reporters later on Thursday, Estrada confirmed that Diaz headed his father’s PSG but that he did not get the letter from him. He said a source at the Palace gave him a copy of the letter. He said his point was that Aquino should have looked into the extortion case immediately to determine if Diaz was harassing Napoles. “They should have investigated him right away,” he said.

The President repeated earlier denials he was close to Napoles.

He said that as an opposition lawmaker, he did not get his share of the Priority Development Assistance Fund (PDAF), or pork barrel, and hence, there was no reason for Napoles to be close to him.

Aquino confirmed having posed for a photograph with Napoles at a birthday party in Cebu. He said this was one of those requests for a posterity shot with him that he could not refuse then, when he was running for public office.

“That’s part of the risks of the job. She made the request. Yes, we have a picture together. But are we close? I think that’s stretching it too much,” he said. “Again, I’ll go back to the issue: What would she gain from being close to me if she’s after the PDAF?”

Napoles went into hiding for two weeks after a warrant for her arrest on the detention case was issued. She surrendered in Malacañang to President Aquino on Aug. 28, 2013, saying she feared for her life. Aquino personally escorted Napoles to Camp Crame after the evening meeting at the Palace.

The President also expressed skepticism over Napoles’ reported offer to return P2 billion to the government.

Apart from the fact that her own lawyers have issued conflicting statements on the matter, this ran counter to Napoles’ claim she had no money to pay for her operation at Ospital ng Makati, he said. The 51-year-old Napoles was confined there for two months for the removal of a tumor in her uterus.

“Truth to tell, we’re facing a lot of problems. As regards her changing statements, we’ve tasked our investigators to get to the bottom of the truth,” he said, adding, “We will recover that one way or another, and let the judicial process get to the truth.”–With a report from Christine O. Avendaño