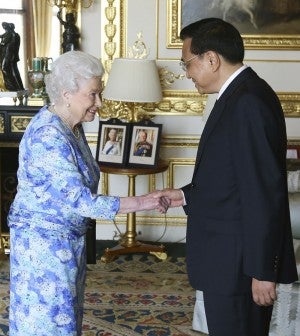 LONDON — Chinese premier Li Keqiang began his visit to Britain with a meeting with Queen Elizabeth II at Windsor Castle on Tuesday — a royal treatment that highlights the importance Britain places on its business and political ties with China.

Britain pulled out all its ceremonial stops for Li, who is on a three-day visit to boost trade ties and mend diplomatic relations that had cooled after Prime Minister David Cameron met with exiled Tibetan spiritual leader Dalai Lama in 2012.

On Tuesday, a military band played to welcome Li and his wife Cheng Hong to the castle, before the queen greeted the pair in a lavishly decorated drawing room. The Chinese leader then traveled to central London for a formal inspection of British soldiers and a meeting with Cameron at his office in Downing Street.

Business, not thorny political topics, will dominate the visit — the two sides are expected to announce a slew of trade and investment deals and potential collaboration in nuclear power, high-speed railways and finance.

Cameron will likely avoid directly addressing China’s human rights record, a subject that often raises Beijing’s ire. Rights activists campaigning for Tibetan independence staged a colorful and noisy protest near Downing Street, and their chants could be heard as Cameron and Li shook hands and posed for photographers.

Li’s meeting with the queen was unusual because the privilege is typically granted to a head of state. Analysts say China likely pushed for the royal audience, underscoring its increasingly aggressive approach to diplomacy.

As the world’s second largest economy and a rising political force, Beijing considers its leaders deserving of all honors and distinctions when they go abroad — and it isn’t afraid to make demands.

China and the U.S. have tangled over protocol surrounding state visits, with Beijing insisting they be defined as top level.