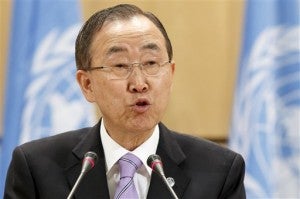 UN Secretary-General Ban Ki-moon addresses the audience during the celebration of the 50. anniversary of the establishment of the UNCTAD (United Nations Conference on Trade and Development), at the European headquarters of the United Nations, in Geneva, Switzerland, Tuesday, June 17, 2014. AP

GENEVA— U.N. Secretary-General Ban Ki-moon is warning that sectarian violence could blow up to huge proportions in Iraq and beyond as Iraq’s instability deepens.

At a news conference Tuesday, Ban said he is deeply concerned about Iraq’s rapidly deteriorating stability, including reports of mass summary executions that the U.N. rights chief has called likely war crimes. Those atrocities and terrorist attacks are taking place as the Islamic State of Iraq and the Levant, or ISIL, an al-Qaida-inspired Sunni Muslim militant group, looks to link areas under its control on both sides of the Iraq-Syria border.

“There is a real risk of further sectarian violence on a massive scale, within Iraq and beyond its borders,” Ban told reporters.

Ban said all Iraqi leaders — political, military, religious and community — must “ensure that their followers avoid acts of reprisal” and together head off more conflict.

He said he has been urging Prime Minister Nouri al-Maliki’s Shiite-led government to take a more inclusive approach.

“The Iraqi government should have one state, whether it is Sunni, Shiite or Kurds, they should be able to harmoniously live together,” Ban said. “I hope that with the strong support of regional countries and the international community in a broader sense, we will be able to help the Iraq government first of all to restore peace and stability in their country.”