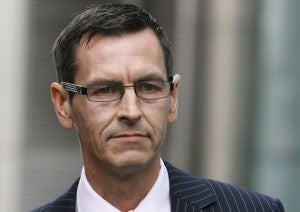 Fathers for Justice campaigner Tim Haries poses for the media at Southwark Crown Court in London, Tuesday, Jan. 7, 2014. Haries is alleged to have smuggled a can of spray paint into Westminster Abbey, before defacing a painting of Britain’s Queen Elizabeth II. AP

LONDON – A campaigner for fathers’ rights to see their children was found guilty on Wednesday of defacing a portrait of Queen Elizabeth II while it was hanging in Westminster Abbey.

Haries, an electrician and activist with the Fathers4Justice campaign group, had denied causing criminal damage of more than £5,000 ($8,200, 6,000 euros), saying his act was a protest to highlight the “social justice issue of our time”.

But the judge at London’s Southwark Crown Court told the jury that civil disobedience was not a valid defence, and Haries was found guilty.

He was released on bail until his sentencing on February 5.

He later released a statement through Fathers4Justice, defending his “peaceful protest on behalf of my children and the millions of children separated from their fathers” by British family courts.

The campaign group said at the time that it did not endorse Haries’s protest, but later that month it launched a campaign encouraging fathers to write the word “help” in “significant places where they are visible to the world”.

Two weeks after Haries’s attack on the queen’s portrait, another Fathers4Justice protester was arrested at Britain’s National Gallery after gluing a photograph of his son to John Constable’s masterpiece “The Hay Wain”.

Founded in 2001, Fathers4Justice has a reputation for headline-grabbing stunts by fathers locked in bitter custody battles.

Its activists have scaled buildings such as Buckingham Palace dressed as superheroes, and in 2004 they sparked a major security alert at the British parliament when they pelted then-prime minister Tony Blair with flour as he was speaking.

Heimans’s painting was commissioned for the queen’s diamond jubilee in 2012 and valued at around £160,000. It cost £7,300 to repair after the vandalism.