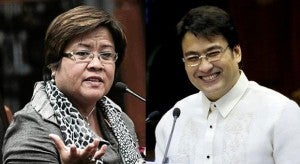 This was how Revilla reacted on Tuesday to De Lima’s statement that while he could run for higher office in 2016, “the matter is actually addressed to his sense of delicadeza.”

Even an ordinary person, the senator said, could run for public office.

(We have not been proven guilty and we will prove that we are not guilty of what we’re being accused of.)