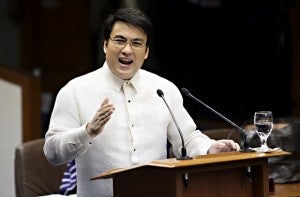 MANILA, Philippines–Anticipating his imminent arrest, Sen. Bong Revilla is taking advantage of his remaining days as a free man by making the rounds of communities to defend himself in the face of allegations that he plundered his pork barrel allocations.

For Revilla, the plunder charges filed against him were meant to clear the way for the administration’s presumptive presidential candidate: Interior Secretary Mar Roxas.

“Do we still have to memorize that? We know who’s the bet of the administration. This is all for ‘Boy Pickup,’” he said in Filipino on Nimfa Ravelo’s program on radio dzBB, referring to Roxas.

In January, Revilla said in a privilege speech that Roxas drove him to Malacañang to meet with Aquino in the middle of the impeachment trial of then Chief Justice Renato Corona in 2012. Revilla suggested that the President wanted him to vote for the conviction of Corona.

With the Sandiganbayan expected to issue an arrest warrant soon, Revilla said his bags were already packed and he was ready to go to jail.

“I have no plan to run away from this case because, I repeat, my conscience is clear,” he added. “If I would run at all, it would be in an election.”

Revilla admitted that he might gun for the presidency in 2016 even from behind bars.

“When that time comes, the people will be the judge. What if I win even if I am detained?” he asked.

“Let’s just look at my performance in the Senate since I began my term and let’s look at his track record when he was at the Senate,” said Revilla, an actor who topped the 2010 senatorial race.

“Even if his education is higher than mine, I can say that I accomplished more than he did as a senator,” he added.

Aquino’s paltry legislative record as a three-term member of the House of Representatives and, later, as a senator for three years, was a major issue thrown against him during the 2010 presidential election.

Revilla said going around communities prior to his arrest would allow him to validate Malacañang’s “new media” team’s finding that “99.93 percent” of netizens had a negative reaction to his privilege speech on June 10.

“Our countrymen still love me even if a lot of minds have been poisoned [in this pork barrel controversy],” he said.

“But the truth will come out and the day will come when I will leave prison holding my head up high, if they will send me to prison.”

Revilla’s speech, music video not a hit among netizens