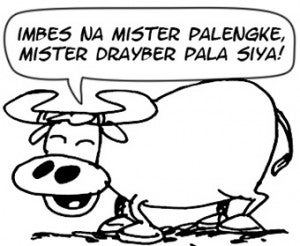 Many people may not know it but “Boy Pick-up”—a character introduced by Sen. Ramon “Bong” Revilla Jr. in a Senate speech—is actually a Cabinet member who loves driving for other VIPs.

Interior Secretary Mar Roxas has been seen driving public officials around, including local chief executives, in his out-of-town engagements.

In a privilege speech on Monday, Revilla called Roxas “Boy Pick-up” for driving him to a meeting with President Aquino in Bahay Pangarap (House of Dreams) near Malacañang Palace.

In that meeting, Revilla claimed the President tried to persuade him into voting to impeach then Chief Justice Renato Corona.

Revilla, implicated by whistle-blowers in the P10-billion pork barrel racket along with several other lawmakers, was one of the 20 senator-judges who voted to unseat Corona in May 2012.

Unknown to many, Roxas actually enjoys being behind the wheel.

“Driving relieves my stress. I feel relaxed when I drive, especially when it’s a long drive,” Roxas told the Inquirer in an interview.

“Every time I attend official engagements in the provinces, I usually drive if I have a chance,” he said.

A scion of one of the wealthiest clans in the country, the interior secretary said he did not find it degrading to be driving for local officials.

“‘Let me drive you there. This would not have happened if not for your leadership,’” Roxas said he told Gomez before he drove her to a nearby basketball court from City Hall.

One of Roxas’ staff members said the interior secretary also drove for 250 kilometers when he checked the situation in Tagbilaran City and eight other towns of Bohol province that were hit by a powerful 7.2-magnitude earthquake in October last year.

“We went around Bohol and traveled almost half of the entire province. Secretary Roxas drove for about seven hours,” said Roxas’ aide, who agreed to talk on condition of anonymity.

“He also wanted to drive in Zamboanga City during the siege (of the city by Moro separatists). But the area was not safe because of the presence of the rebels,” the staff member added.

In the aftermath of Super Typhoon Yolanda, Roxas was also seen driving around Tacloban City at night to ensure that policemen were patrolling the city and manning checkpoints to prevent looting.

Meanwhile, at the House of Representatives, Navotas Rep. Toby Tiangco said Malacañang showed its hypocrisy when it met secretly with Revilla to persuade him to vote for the impeachment of Corona in 2012.

Tiangco, secretary general of the opposition United Nationalist Alliance, accused the administration of taking illegal shortcuts to pin down Corona.

“There’s no need to ask whether what they did was right, because it was wrong … You can’t use illegal means,” Tiangco said on the phone.

He said that while he believed that what President Aquino did was wrong, it was useless to talk of impeaching Aquino because the President’s allies dominated the chamber.

Tiangco said the fact that the Aquino-Revilla meeting took place in a clandestine manner showed that even the Palace knew that what it was doing was not right.

Cavite Rep. Elpidio Barzaga said the President did not commit any impeachable offense as there was no betrayal of public trust.

He also said Revilla could have refused to meet the President.

House Majority Leader Neptali Gonzales II said anybody who believed the President committed an impeachable offense should file a case in the chamber.

But he said that since the Palace had denied Revilla’s allegation that he was induced to vote against Corona, the matter boiled down to one person’s word against another.

“What is important is what (Revilla) said later … that he decided on the impeachment based on what in his estimation was the correct thing to do,” he said.—With a report from Leila B. Salaverria