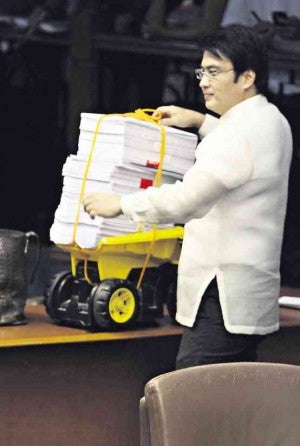 ‘TOYING’ WITH EVIDENCE? Sen. Bong Revilla uses a toy truck to present what he describes as the justice department’s “truckload of documents” in plunder charges against him during his privilege speech on Monday. Justice Secretary Leila de Lima called the stunt “insulting” as the boxes of documents in question were photocopies needed by other investigating agencies. GRIG C. MONTEGRANDE

Over breakfast in his official residence, President Aquino appealed to Sen. Ramon Revilla Jr. to vote to impeach then Chief Justice Renato Corona in 2012, the senator said on Monday.

At the resumption of Congress session following the holiday break, Revilla took the floor and lambasted the Aquino administration for plotting to undermine the opposition in the 2016 presidential election by linking him to the alleged P10-billion pork barrel scam.

The senator denied involvement in the purported racket, accused the whistle-blowers of conniving with a syndicate in the Department of Budget and Management (DBM) to mount the scam, and skewered the administration over a host of issues that he said digressed from the President’s daang matuwid or reformist mantra.

When many thought he was mouthing a rehash of old issues, Revilla dropped the bombshell toward the end, and raised the question of whether the President could meddle in a political exercise like Corona’s impeachment trial in the Senate.

“Is it right for the President of the Republic to interfere with a legal process that is supposed to be independent?” he told a packed crowd, including several members of the Revilla clan led by his father, the wheelchair-bound former Sen. Ramon Revilla Sr., who wept during the speech.

Revilla said that then Transportation Secretary Mar Roxas personally drove him to the President’s residence, called Bahay Pangarap, or House of Dreams, inside the Malacañang compound in Manila from Cubao, Quezon City, home of the Araneta-Roxas family.

“Mar Roxas led the discussion on why Chief Justice Corona should be impeached. Then before we were done, I was surprised by what the President told me: ‘Pare, parang awa mo na, ibalato mo na sa akin ito. Kailangan sya ma-impeach (Pal, be considerate. Do it as a gesture of goodwill. He should be impeached),’” he said.

Abad seconded, according to Revilla, by saying: “Let’s help each other, Senator.”

“And the rest is history,” he said in his 53-minute privilege speech. “CJ Corona was the first Chief Justice of the Supreme Court to be impeached.”

Revilla was among 20 senators who voted to convict Corona for dishonesty in his statement of assets, liabilities and net worth in May 2012 following a highly charged trial. Senators Miriam Defensor-Santiago, Joker Arroyo and Ferdinand Marcos Jr. voted to acquit Corona.

Revilla said he was compelled to disclose his encounter with the President because of “strong apprehensions.”

“If P-Noy could do this to CJ Corona, he could also influence the Ombudsman and Sandiganbayan to rule against us,” he said of the plunder complaint he, Senators Jinggoy Estrada and Juan Ponce Enrile, alleged pork barrel mastermind Janet Lim-Napoles and 34 others were facing in the Ombudsman in connection with the scam.

“And why not? The attempt to influence the Supreme Court to declare as constitutional the President’s pork barrel that we call the DAP (Disbursement Acceleration Program) is big news. Aren’t the justices being threatened with impeachment, and wasn’t the DAP used in the impeachment? This has become habit-forming, Mr. President,” he added.

In a special audit, the Commission on Audit (COA) reported last year that P6.2 billion in pork barrel was transferred to 82 nongovernment organizations (NGOs) from 2007 to 2009, including at least eight that had links to Napoles.

Estrada likewise delivered a speech in September last year, disclosing that senators were allotted an additional pork barrel of at least P50 million each months after the Senate convicted Corona as “incentive.”

Abad later confirmed that 20 senators received additional pork barrel amounting to P1.107 billion after Corona’s trial and that the fund was sourced from the DAP, a mechanism for impounding government savings. The constitutionality of the DAP has been raised in the Supreme Court.

Revilla said the meeting with the President was initiated by Roxas, who was said to have invited him to the Cabinet secretary’s residence in Cubao before the conclusion of Corona’s trial. He did not specify the date.

He said he arrived around 8 a.m. and was informed that they would leave together in Roxas’ SUV for Malacañang, without their aides.

Before driving out, the senator recalled that Roxas had the license plate of his SUV removed, and asked him to sit at the back.

“Let’s take a look at this picture,” he said, pointing to a PowerPoint screen.

“That’s the plate number that its owner removed from his car, and inserted it in the sun visor. That’s No. 6, which belongs to a Cabinet secretary. Now I bring to your attention to the driver who is also the owner of the said vehicle. He’s none other than DILG (Department of the Interior and Local Government) Secretary Mar Roxas, then DOTC (Department of Transportation and Communications) secretary,” he continued.

He said he took the picture “using my own cell phone when Boy Pick-up, Secretary Mar Roxas, drove me from his home in Cubao going to Malacañang,” he added.

He said he took the picture because he felt the turn of events was “weird.”

Revilla said that upon reaching the gate of Bahay Pangarap, Roxas looked out so the guard could see him and the vehicle was allowed entry.

After the breakfast, Roxas dropped him off at a restaurant outside Malacañang because he was rushing “to pick up others,” he said.

In a press conference Monday night, Communications Secretary Herminio Coloma said the President met with Revilla to express concern that pressure was being put on the senator-judges to acquit Corona and asked Revilla to decide the case on the merits.

Asked for comment by reporters, Roxas just shrugged and smiled, shaking his head before turning his back on them. Abad told GMA News the Revilla blast was “baseless.” Levito Baligod, counsel for the pork barrel whistle-blowers, said the speech was part of “show biz.”

In his speech, Revilla said the administration, in a move to discredit potential presidential candidates in the 2016 elections, turned the whistle-blowers into state witnesses despite their admission they had forged documents. He said his harassment began after he rejected the President’s request to support his candidate for governor in Cavite.

Contrary to the whistle-blowers’ claims, Revilla said he did not sign documents endorsing dubious foundations as recipients of his Priority Development Assistance Fund (PDAF). In his PowerPoint presentation, he presented two sets of signatures showing “clear as sunrise” that “documents that they’re using as evidence against me are not mine.”

“I have nothing to do with this scam, those whistle-blowers, nor Janet Lim-Napoles. I have no dealings and transactions with them,” he said.

Then Revilla trained his guns on the President’s policy of daang matuwid (straight path).

He enumerated the alleged sins of the administration, from its supposed mishandling of the relief operations for victims of Super Typhoon Yolanda to the high power rate adjustment, to the planned fare increase in commuter trains, to the fake list of beneficiaries of the government’s conditional cash transfer program, among others.

He also mentioned the implication of the President’s sister Elena “Ballsy” Aquino-Cruz in alleged attempts to extort $30 million from a Czech train manufacturer.

“President Aquino, I’m sure you feel the pain arising from the implication of your sister and brother-in-law in an irregularity,” he said.

Revilla also recalled that Aquino himself paid for the bail bond of administration ally Grace Padaca for the graft and malversation charges she was facing in the Sandiganbayan in 2012.

“I’m not asking you to bail us out once the warrants are issued. My only appeal is that you treat us fairly, and presume us innocent until proven guilty,” he said.

While concluding his speech, Revilla turned emotional and said that his family had been vilified in the “calibrated plan of piecemeal and serial revelations aimed to create a bandwagon of hatred.”

He said his daughter discontinued her law studies because of allegations against him.

At this point, the Revilla patriarch, who was wheeled in front of the VIP box where the rest of the clan including the senator’s wife and children sat, was seen wiping away tears with his handkerchief.

The senator hugged his father after his speech.