Gigi Reyes’ camp insists her right to due process was violated

MANILA, Philippines–The lawyer of Jessica Lucile “Gigi” Reyes pleaded before the Sandiganbayan on Tuesday to suspend the proceedings of her plunder case over the pork barrel scam, saying Reyes’ constitutional right to due process was violated.

Atty. Anacleto Diaz told the Sandiganbayan third division that Reyes was not given a copy of Ruby Tuason’s sworn affidavit before the Ombudsman ruled to indict her for plunder.

Such sworn statement was used as a basis to grant Tuason immunity from prosecution, Diaz said, adding that it was also used as document to indict Reyes for the charges. 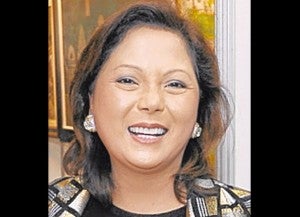 “We are essentially saying her constitutional right to due process and equal protection of law were violated,” Diaz told reporters after the division heard their motion to suspend proceedings.

Tuason has testified that she personally handed to Reyes millions of pesos in kickbacks for Enrile in meetings in restaurants. Tuason said in a senate hearing that in some of the meetings, Enrile was even present.

Diaz also urged the Ombudsman that there should be a clarificatory hearing with both camps to really confirm that the signatures allegedly of Reyes affixed in various transaction documents were authentic.

Reyes had said in her affidavit that her signature in these documents was forged.

“If you are doubting what we are saying in our counter affidavit, if you need 1,000 sample signatures, tell us. Then we will produce it to you to (prove) once and for all that the signatures you are attributing to us were forged,” Diaz said.

The division, chaired by Presiding Justice Amparo Cabotaje-Tang, asked the special prosecutor to comment on the “serious allegations” that Reyes’ right to due process was violated.

But the prosecution said it could not comment because it only prepared a comment/opposition on the motion to suspend proceedings.

Reyes, the former chief of staff of Senator Juan Ponce Enrile and a co-accused in the case, was asking the anti-graft court to defer its proceedings on the plunder charges against her so as not to prejudice the Supreme Court’s pending decision on her motions for a temporary restraining order and a writ of preliminary injunction.

In 10-page urgent motion before the Sandiganbayan, Reyes has said the anti-graft court should just wait for the Supreme Court’s decision on her plea for a temporary restraining order against the warrant, as well as a writ of preliminary injunction.

Reyes’ camp in the motion also said suspending the proceedings would save the court some time and resources “should the Supreme Court find that the Ombudsman violated the accused’s constitutional rights and annul the assailed resolutions issued by the Ombudsman.”

“As the Supreme Court has required the Ombudsman to comment on the petition within 10 days from receipt of the order before ruling on accused application’s for injunctive relief, and three days have already elapsed since then, no substantial delay or prejudice will be caused by suspending proceedings against the accused in the meantime,” the motion read.

Reyes is co-accused in the plunder and graft charges against Senator Juan Ponce Enrile. The other accused are Senators Ramon Revilla Jr. and Jinggoy Estrada, as well as alleged mastermind Janet Lim-Napoles.