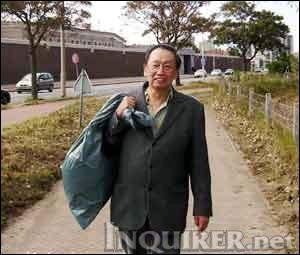 MANILA, Philippines – Even with communist founder Jose Maria Sison calling the shots for the Communist Party of the Philippines-New People’s Army, the Armed Forces of the Philippines remains steadfast in continuing its goal of persuading the rebels to join their “quest for peace.”

Lieutenant Colonel Ramon Zagala, AFP Public Affairs Office Chief, said the AFP is not concerned with “whoever” is leading the communists, as long as government troops remain steadfast in their mission for peace.

A military source said that Sison, who is in self-exile in the Netherlands, would temporarily call the shots for the communist party before a permanent replacement for the Tiamzon couple takes the seat.

“For now, Joma (Sison) is the one dictating orders, but he can only deal with policies because one has to be here to lead the revolution,” the source, who requested anonymity as he is not allowed to speak to the media, said.

Benito and Wilma Tiamzon were arrested on March 22 in Cebu.

Zagala said that they would still encourage communist rebels to abandon their arms.

Zagala added that the military would continue to persuade the armed leftists to join the government and find a “peaceful solutions to their problems.”

With NPA’s strength, peace talks an option for next president