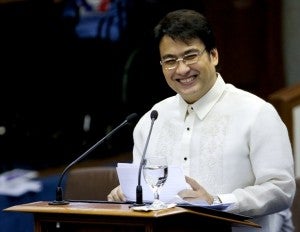 MANILA, Philippines—While there is no legal impediment yet for Senator Ramon “Bong” Revilla Jr. to run for higher office in 2016, Justice Secretary Leila De Lima said “the matter is actually addressed to his sense of delicadeza.’’

“Strictly speaking there is no legal impediment for him to run in 2016. That matter is actually addressed to his sense of delicadeza,” De Lima told reporters on Monday.

Revilla is facing a case for plunder and for graft and corruption before the Sandiganbayan in connection with the Priority Development Assistance Fund (PDAF) scam.

“The decision whether or not to run inspite of these big cases filed against him is actually addressed to his sense of personal delicadeza and sense of utmost responsibility towards upholding national interest,” De Lima said.

Revilla is the chairman of the Lakas-CMD party of former president Gloria Macapagal-Arroyo.

With the raffling of the plunder cases and the assignment to various divisions, the anti-graft court is expected to issue a warrant of arrest against Revilla and his colleagues, Juan Ponce Enrile and Jinggoy Estrada, and their other co-accused.

Revilla, in a radio interview over the weekend, admitted he might run for president even if behind bars.

De Lima, a former election lawyer, said there is only a legal impediment against Revilla’s plan if he will be convicted.

“Comelec [Commission on Elections] can only disqualify him if there is already a conviction,” she said.

Another election law expert, Romulo Macalintal, echoed De Lima’s opinion, saying Revilla will only be barred from running for public office if he is convicted and his conviction has attained finality.

Revilla has already denied the charges that he misused his pork barrel allocations by putting it in dubious non-government organizations established by businesswoman and alleged pork barrel scam mastermind Janet Lim Napoles.

He is already making rounds of communities to explain his side and to stress that he did not plunder the PDAF funds.

Macalintal said it could not be considered early campaigning because Revilla has not filed a certificate of candidacy and that the country is still not within the campaign period.

Revilla’s announcement of intent to run for President his right, Palace says