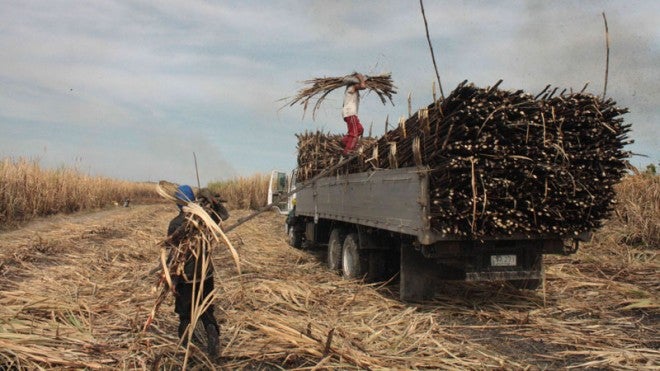 Farm workers at the sugarcane fields of Hacienda Luisita, who are now the owners of about 4,100 hectares in the estate through the government’s land reform program. The Department of Agrarian Reform plans to place more farmlands under the agrarian reform program after civil society groups submitted lists for notices of coverage and President Aquino certified as urgent bills that would allow the agency to issue such notices even after June 30, an official said. E.I. REYMOND T. OREJAS

CITY OF SAN FERNANDO, Philippines—The Department of Agrarian Reform (DAR) plans to place more farmlands under the agrarian reform program after civil society groups submitted lists for notices of coverage (NOCs) and President Aquino certified as urgent bills that would allow the agency to issue such notices even after June 30, an official said.

“There may be more landholdings since there are many civil society organizations submitting lists for NOC issuance, which our field offices have to validate,” Anthony Parungao, DAR undersecretary for legal affairs, said in an interview on Sunday.

An NOC officially places a landholding under the program through which agricultural lands will be distributed to tenants or landless farmers at state-subsidized rates, to be paid in 30 years and to be made productive with government aid.

The agency, Parungao said, is looking forward to seeing the social justice program expand its scope if Congress extends the power of the agency to issue NOCs and accept voluntary offers to sell beyond June 30.

“I’m confident a law will be passed soonest, especially in light of President Aquino’s certifications,” Parungao told the Inquirer in a text message.

Aquino has certified as urgent the House and Senate versions of bills on NOC extension by two years until 2016, the same year when Republic Act No. 9700, or the Comprehensive Agrarian Reform Program Extension with Reforms (Carper), will expire.

Citing a report by Jose Grageda, DAR undersecretary for field operations, Parungao said the agency would be publishing the NOC in national newspapers and tapping additional personnel to encode data.

“We don’t have estimates yet. We’ve set a June 22 deadline to our field offices to submit a list for publication,” he said.

“Of course, we intend to issue NOCs for all remaining landholdings, assuming that information and documents for details needed to finalize NOCs are available,” Parungao said.

He said the Land Registration Authority had certified the loss of the original copies of 1,200 titles in Negros Occidental province while DAR records were washed out by floods spawned by Super Typhooon Yolanda (international name: Haiyan) in Leyte province last year.

“So, for sure, there would be landholdings left without NOCs. That’s why [there is a] need to give the DAR more time to issue NOCs,” Parungao said.

He said the DAR had been working to hasten the process since three years ago.

“We’ve done everything to expedite, starting with publication of NOC, cleansing of database, personnel augmentation and movements, logistical support and even the adjustment of our legal framework by coming out with an [administrative order] allowing for the use of other documents, [such as] photocopies of titles, tax declarations, titles or deeds, for adjacent properties, among others,” he said.

Parungao said RA 9700 allowed the DAR to buy and distribute lands that were covered by NOCs.

No to Carper extension

“The DAR’s boast that 4.49 million ha, or 84 percent of the total 5.36 million ha targeted for distribution, has already been awarded to farmer-beneficiaries is belied with hundreds of thousands of cases of cancellation of awarded lands due to exemption from land reform coverage and land-use conversions from agricultural to industrial, residential, commercial and tourism use, including mining operations,” Rafael Mariano, KMP chair, said in a statement.

In a statement on Saturday, Parungao said, “The DAR wishes to reassure the farmers that there is no need to panic.”

“Even if the NOC extension bill was not passed last Wednesday, the DAR can still distribute land. What the DAR cannot do after June 2014 is to issue notices of coverage and accept voluntary offers to sell unless its power to do so is extended,” he said.

Parungao also clarified that the proposed bills pending in Congress were for the extension of the power of the DAR to issue NOCs and to accept voluntary offers to sell, and not for the extension to distribute lands.–With a report from DJ Yap in Manila