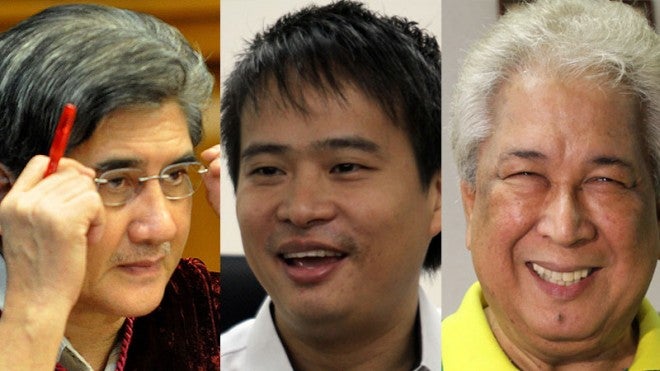 (From left) Sen. Gregorio “Gringo” Honasan, Tesda Director General Joel Villanueva and Manila Rep. Amado Bagatsing (fifth district) are three of 11 persons that will be charged with malversation of public funds this week for alleged misuse of their pork barrel from 2007 to 2009, the Inquirer has learned. INQUIRER FILE PHOTOS

MANILA, Philippines–A senator, a government official and eight former and current members of the House of Representatives will be charged with malversation of public funds this week for alleged misuse of their pork barrel from 2007 to 2009, the Inquirer has learned.

To be charged with them in the Office of the Ombudsman is businesswoman Janet Lim-Napoles, the alleged brains behind the P10-billion pork barrel scam.

The charges will be the third batch of cases to be brought by the government against Napoles, lawmakers and government officials who allegedly pocketed millions of pesos in public funds intended for rural development.

Of those to be charged, only Villanueva is a member of President Aquino’s Liberal Party. Honasan is an independent.

A source who has knowledge of the NBI investigation said on Saturday that charges would also be filed against the older brother of Napoles, Valentin Limchu, who allegedly facilitated the Honasan transaction with Michael Benjamin, the senator’s chief political officer.

Limchu is the “VLL” in the Benhur Luy files published by the Inquirer in a series of reports last month.

Luy, a relative and former aide of Napoles, is the principal whistle-blower in the pork barrel scam scandal.

According to the source, Honasan will be accused of authorizing the release of P15 million from his Priority Development Assistance Fund (PDAF) allocation to a foundation controlled by Napoles, the Agriculture and Economic Program for Farmers Foundation, for various livelihood projects to be implemented by the National Livelihood Development Corp. (NLDC).

The source said alleged agents of the lawmakers would also be charged. Among them are Energy Regulation Commission Chair Zenaida Ducut, Celia Cuasay, Maite Defensor, Anthony Dequina and Manuel Harmin.

The Inquirer tried to contact Honasan and the alleged agents for comment on Sunday, but failed to reach any of them.

Ducut has chosen to keep silent since the start of the scandal, while Dequina, a former North Cotabato representative, has expressed surprise at the mention of his name among the alleged pork barrel agents.

“I could not believe my name was dragged into this mess. How could I transact whatever deal with Napoles when I was no longer a solon at that time?” he said.

Learning on Saturday that he was among those to be charged, Bagatsing, a member of Kabalikat ng Bayan sa Kaunlaran (Kabaka) party, said he had already responded to and explained allegations linking him to the pork barrel scam. He said he did not understand why the NBI was proceeding to bring charges against him.

Bagatsing said that if there was a real whistle-blower against him, he should have been included in the first batch of pork barrel scam cases filed by the NBI in the Ombudsman on June 6.

“I’ve already explained the documents I have,” he said.

Bagatsing has filed perjury charges against Napoles for spreading false information involving him.

Napoles has said Bagatsing channeled P1 million of his pork barrel funds to one of her foundations and received a 40-percent “rebate.”

Bagatsing said he could not have authorized funding for any project in 2007 because he received his PDAF allocation only in 2008. He also denied authorizing anybody to accept a rebate on his behalf from a transaction with Napoles.

For his part, Rodriguez, a member of Puwersa ng Masang Pilipino of former Vice President and now Manila Mayor Joseph Estrada, said on Saturday that if complaints would be filed against him, he would answer the allegations and prove he had not committed any wrongdoing.

“If there’s a filing, we will face the music because we’re sure of our innocence,” Rodriguez said.

On Sunday, he maintained that he had never received any amount from Napoles or any of her associates.

“I have not met her at any time nor any of her people,” Rodriguez said. “My signatures in all the documents were forged.”

Villanueva, a former nominee of Citizens Battle Against Corruption to the House and a friend of President Aquino, could not be reached for comment on Sunday. But he has denied knowing Napoles or doing business with any of her “lieutenants.”

“I’ve been working hard to build my name and that of my father and this is [what they accuse me of],” he said in February after he was reported to be among those under investigation in the pork barrel scam.

“If there’s any evidence against me, I will go to jail myself,” he said.

Estrella III has admitted meeting Napoles, but denied doing business with her.

“I have no association with her. I see her sometimes and we just exchange hellos. I did not know that she was associated with the foundations mentioned in the papers,” he said.

Estrella has said that he never channeled pork funds through any foundation, stressing that government agencies are the implementers of his projects.

Abono’s Robert Raymund Estrella has the same thing to say in denying dealing with Napoles.

“We never gave any of our funds to any Napoles NGO,” Estrella said.

La Union Representative Ortega, a member of the Lakas-CMD party, has also denied ever meeting or doing business with Napoles.

Former La Union Rep. Manuel Ortega, a member of the Nationalist People’s Coalition, could not be reached for comment up to press time Sunday night.

Real, a Lakas-CMD member, could not be reached for comment on Sunday.

Official records from the Department of Budget, a Commission on Audit (COA) special audit report, documents from the implementing agencies and the financial records of Benhur Luy form part of the evidence to be submitted to the Ombudsman against the respondents, the source said.

The source added that as in the first two batches of cases, the third batch would also use as evidence the testimonies and documentary evidence submitted by the whistle-blowers led by Luy, Marina Sula and Merlina Suñas.

In an interview last week, Justice Secretary Leila de Lima said the third batch would cover “a [few] more” lawmakers than those charged in each of the first two batches and would not involve plunder charges but malversation of public funds.

The first batch of cases covered 39 respondents, of whom eight were former and incumbent lawmakers, including Senators Juan Ponce Enrile, Jinggoy Estrada and Ramon Revilla Jr.

The three senators and the others were indicted in the Sandiganbayan for plunder and graft on June 6.

The second batch of cases, filed on June 9, had 34 respondents, seven of whom were former members of the House of Representatives.

In previous interviews, De Lima said the lawmakers received from Napoles 40 to 60 percent of the cash value of the projects as kickback in exchange for selecting the foundations identified with her as handlers of their pork barrel-funded projects. Most of the projects were nonexistent.

In filing the cases, De Lima said, the NBI focused mainly on the criminal charges and that it was up to anyone to file other charges against the accused.–With reports from Leila B. Salaverria, Gil C. Cabacungan and Inquirer Research