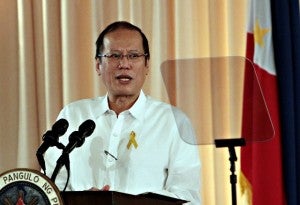 MANILA, Philippines—The Presidential Security Group did not file charges against the student activist who heckled President Benigno Aquino in Naga City on Independence Day, Malacañang said Saturday, denying claims it was out to harass the young man.

“I confirmed with the PSG commander, and the Presidential Security Group did not file a case,” Valte said over the government-run dzRB radio.

Nonetheless, Valte said that the filing of charges of causing “tumults and other disturbance” by the PNP against Mijares should not be misconstrued as “suppression of the freedom of speech.”

While the President was delivering his Independence Day speech at a public square in Naga City Thursday, the 19-year-old Mijares shouted anti-administration slogan while holding aloft anti-Aquino placards.

The PSG arrested Mijares, a student from the Ateneo de Naga University.

Mijares, who also charged with assault on an agent of authority for resisting arrest and damaging the uniform of a policeman, was released after posting P8,000 bail.

Valte denied claims by militant youth organizations that the government was suppressing the rights of Mijares.

“You know that’s not true. We’ve seen the protests and the rallies, and they conducted these without any interference. The PNP was just making sure that their actions were orderly and peaceful,” she said.

She said student activists also held rallies at Liwasang Bonifacio in Manila, and these ended peacefully without anyone being detained or charged.