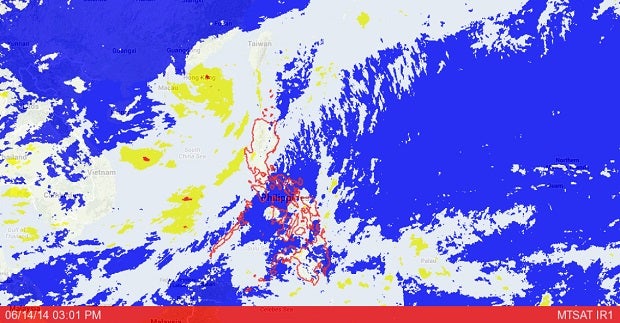 MANILA, Philippines—A tropical depression has been spotted west of the Batanes islands but it was not expected to enter the Philippine area of responsibility, the state weather bureau said Saturday.

As of Saturday morning, the the depression was estimated to be some 500 kilometers west of Batanes capital of Basco, according to the Philippine Atmospheric, Geophysical and Astronomical Services Administration (Pagasa).

It was moving in a north-northwest direction, and thus, there was only a slim chance it would enter the country, forecasters said.

The southwest monsoon, or “habagat,” continued to  prevail over most of Philippines, particularly its western sections, bringing light to moderate rains to Zambales, Bataan, Pampanga, Tarlac. and Bulacan and adjacent provinces, Pagasa said.

According to Pagasa’s 24-hour outlook, the Batanes, Calayan and Babuyan groups of islands, the regions of Ilocos, Cordillera, and the provinces of Zambales, Tarlac, Bataan, Pampanga and Bulacan would experience monsoon rains.

Metro Manila, Cagayan Valley, Calabarzon and the provinces of Aurora, Nueva Ecija, Mindoro and Palawan would have occasional rains, it added.

The rest of the country will be partly cloudy to cloudy with isolated rain showers or thunderstorms, Pagasa said.

Moderate to strong winds coming from the southwest will prevail over Luzon and its coastal waters will be moderate to rough.