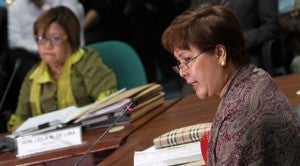 So says De Lima even as she maintains she won’t dignify the issue and press charges against former “jueteng” whistleblower Sandra Cam.

Cam has threatened to release the alleged sex video if De Lima would get the nod of the Commission on Appointments.

“You know that’s a threat. Didn’t she know she’s been committing a crime already all this time?”      De Lima told Senate reporters in a mix of English and Filipino when asked about Cam’s warning.

De Lima was attending her confirmation hearing at the Senate.

She said all the scorns she’s getting from Cam are “actionable” and the sex tape―real or fake―if released is a violation of the Anti-Voyeurism Law.

“I’m sure that’s a fake. Remember whether it’s fake or genuine, it’s still a violation of Anti-Voyeurism Law,” said De Lima    in an interview before she    faced her    confirmation hearing at the CA.

Cam      has been opposing De Lima’s confirmation and even raised the issue in her affidavit submitted to the CA’s committee on justice and judicial and bar council, citing the justice secretary’s  alleged      illicit affairs with      two  men, including a married diver.

Cam, who appeared    at De Lima’s    confirmation hearing,   maintained the existence of the purported sex video.

“Well, there is. I’ve seen it but I’ll tell the commission later,”  she said in a separate interview also before the hearing.

Read Next
CA panel recommends confirmation of COA’s Heidi Mendoza
EDITORS' PICK
Acer Philippines welcomes you to its first flagship store
Is your company a growth champion? Stand up and be recognized!
New Year, New Rediscoveries
CHEd steps into UP-DND row over ‘problematic’ accord, to broker talks
Lacson advises vaccine czar to ‘watch his back’
Climate advocates among first to cheer new US president
MOST READ
LOOK: Duterte registers for the national ID system
Nissan to shut down Laguna plant
PET questions Calida interest in private case
IATF OKs licensure exams scheduled from January to March 2021
Don't miss out on the latest news and information.