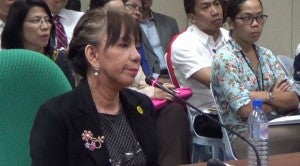 MANILA, Philippines—After three long years, the appointment of Commission on Audit (COA) commissioner Heidi Mendoza was finally recommended for confirmation by a panel of the Commission on Appointments (CA).

No member of the CA’s committee on constitutional commissions and offices, including Senator Jose “Jinggoy” Estrada, objected when a motion to recommend Mendoza’s confirmation was made on the floor.

But Estrada, who put Mendoza under intense grilling, put on record that he was not through yet with his questioning.

The nomination of Mendoza, who was appointed in April 2011, will be transmitted to the CA plenary for either approval or rejection on Wednesday afternoon.