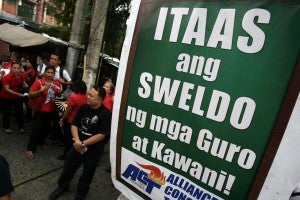 Teachers and education advocates gather at Mendiola Bridge in Manila on June 2 to address the shortages in public education and enact salary increase. INQUIRER FILE PHOTO

MANILA, Philippines — Public school teachers are pressing Congress to approve a bill that would increase their basic salaries even as they reiterated a threat to go on mass leave if their demands go unanswered.

Members of the Alliance of Concerned Teachers (ACT) trooped to the House of Representatives Monday to urge appropriations committee chairman Representative Isidro Ungab to hold hearings in the next few weeks on the pending bills providing for salary increases even if Congress would be on recess.

The teachers are hoping that the salary increase would be included in the 2015 budget, which Congress is expected to discuss in the next few months.

ACT chairman Benjie Valbuena and Manila Public School Teachers’ Association president Louie Zabala said that if the salary increase for teachers and other government personnel would be ignored during the crafting of next year’s budget, they would go on simultaneous leave.

“If we see that there would be no budget allocation in 2015 for salary increase for the teachers and government personnel, we would have no option but to go on mass leave as a response to the government turning a deaf ear to us,” Valbuena said in a press briefing.

He said there should be no debate as to whether teachers need a raise in their salaries, since everybody knows they work so hard for so little and carry a huge responsibility.

“If we neglect the teachers, it’s as if we are neglecting the youth,” he said.

France Castro, also of ACT, said the group finds it hard to believe there are no funds for the salary increase when billions of pesos are lost to corruption.

ACT party-list Rep. Antonio Tinio said the government would still be able to afford the salary increases even if this would also entail increasing the wages of government workers because of the salary standardization law.

Tinio, one of the authors of the bills increasing teachers’ pay, said it was a matter of giving priority to the people who handle the education of the country’s children.

Tinio believes the government would be able to find the P60 billion needed for the salary increase if it wanted to.

“It’s not a question of affordability, it’s a matter of priorities,” he said.

Over a hundred lawmakers have already expressed support for his measure, Tinio said, and he expects more House members to back his bill.