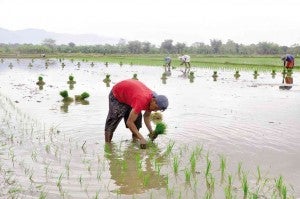 MANILA—A lawmaker expressed concern Monday about an increase in the price of rice because of the El Niño weather phenomenon, as several other legislators indicated they were dissatisfied with the Department of Agriculture’s preparations for the expected dry spell.

At the joint hearing of the House Committees on Agriculture and Food Security, Roy Abaya of the agriculture department’s Field Operations Service said there could be a shortfall of 1.2 million metric tons in the production of palay or unmilled rice because of El Niño.

An estimated 300,000 hectares could also be affected in terms of irrigation, said Bonifacio Labiano of the National Irrigation Administration’s engineering center.

But Bayan Muna Rep. Neri Colmenares was not convinced about the government’s preparations for El Niño.

Colmenares said he believed the government should be doing more to keep the country’s rice supply and its price stable.

“I have seen no action on the part of the government even with the appointment of a new adviser on the issue of alleviating the increase in the price of rice,” Colmenares said.

An increase in rice prices would increase the inflation rate, and thus the prices of all goods would be affected, he added.

If the mitigation plans do not succeed, the Philippines might be forced to import its staple food, he warned.

Agriculture officials said they have been preparing for El Niño. Among the mitigation measures are the buffer stocking of seeds; the early planting of crops; the prioritization and allocation of water for irrigation, domestic need, and power; the provision of crop insurance; the repair of damaged irrigation dams and canals; cloud seeding; planting of drought tolerant rice varieties; and use of water saving technologies.

But Northern Samar Rep. Emil Ong said not all of the irrigation facilities in his province were working, and called on irrigation officials to do field work and check on the status of the facilities.

Nueva Ecija Rep. Estrellita Suansing said farmers in her area have not begun planting because irrigation of the fields has not begun.

But Labiano said land soaking has begun, though there have been one- to two-week variations in some areas.