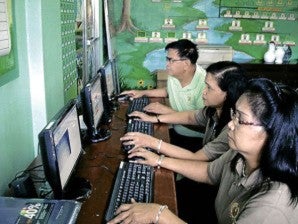 After the latest teachers rally staged outside Malacañang, the DepEd said it would not tolerate protest actions that would affect the students’ learning.

In a statement on Monday, the DepEd said it “recognize(s) the right of our teachers to raise their concerns publicly.”

“However, we enjoin certain groups not to take any action that greatly affects the delivery of basic services to our learners,” the agency said.

“Let us draw the line at abandoning our children. As educators and civil servants, let us always keep the interests of our learners in mind,” it added.

Members of the Alliance of Concerned Teachers (ACT) conveyed on Malacañang Monday and symbolically padlocked a gate leading to the Department of Budget and Management building, accusing the Aquino administration of ignoring the teachers’ demands.

Another group, the Teachers Dignity Coalition (TDC), has been holding protest rallies outside Malacañang this month to press for a salary increase.

ACT demanded an increase in the teachers’ entry-level salary from P18,549 to P25,000, with corresponding adjustments to the salaries of more senior teachers.

The TDC, on the other hand, asked for a P10,000 increase, saying their demand was based on the recommendation of the Congressional Commission on Education in 1991 to give public school teachers a minimum monthly salary of P28,000.