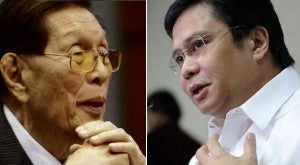 Estrada, Enrile and Senator Ramon “Bong” Revilla Jr. and other individuals have been charged with plunder at the Sandiganbayan in connection with the “pork barrel” scam.

Estrada reiterated that he was willing to surrender himself to authorities once the warrant of arrest was issued against them.

He said he would not also mind if the warrant of arrest would be served whether inside or outside the Senate building.

(It’s OK. I’ll voluntarily surrender myself. All they have to do is tell me where they want me to go. I am easy to talk with. If the police or the sheriff of the Sandiganbayan told me to go to Sandigan or Camp Crame, I’d go there. If they told me they have warrant of arrest, I have no problem with that, I will not evade arrest).

“(What would hurt me the most are my children, my wife, my parents, especially my younger children, those who would sleep beside me at night. They are innocent when it comes to politics. They are clueless to what’s happening with their father. That hurts me the most).”

VACC to police: Don’t be afraid to arrest 3 senators