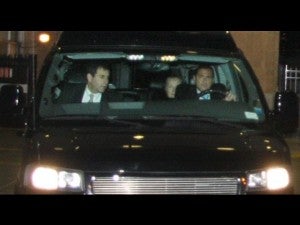 This Jan. 2, 2013 file photo shows then-Secretary of State Hillary Rodham Clinton, center, leaving New York-Presbyterian Hospital after being discharged after being treated for a blood clot in a vein behind one of her ears. AP

WASHINGTON — Hillary Rodham Clinton says if she seeks the White House again she will release her medical records in the same manner of past presidential candidates.

The former secretary of state told ABC News in an excerpt of an interview aired Friday that she would “do what other candidates have done. Absolutely.”

Clinton fell ill with a stomach bug in December 2012 after returning from a trip to Europe and was severely dehydrated. While at home, she fainted and fell, suffering a concussion.

During a follow up examination on Dec. 30 that year, doctors discovered a blood clot in a vein that runs between the skull and the brain behind her right ear, and she was admitted to New York-Presbyterian Hospital for treatment with blood thinners.

Clinton said in the interview that her health is “very good.” She noted she previously had a blood clot in her right leg and said the two cases were related.

The potential 2016 presidential candidate said she expects to be on blood thinners the rest of her life, adding, “I don’t mind because I don’t ever want to go through that again.”

She was asked about Republican strategist Karl Rove, who suggested earlier this year that Clinton had serious health problems that would be a relevant issue if she runs for president again. Clinton said Rove was called George W. “Bush’s brain in one of the books written about him, and I wish him well.”

Obama and Hillary Clinton lunch at the White House