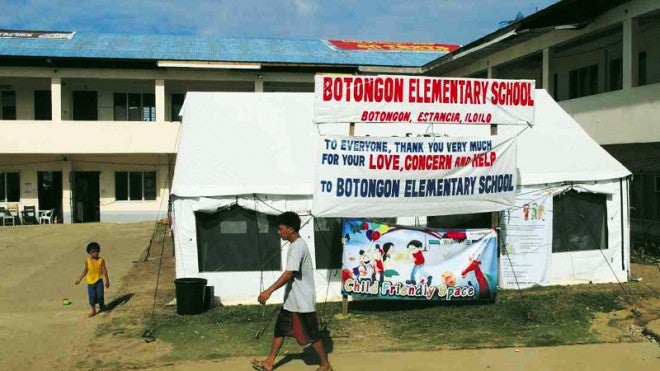 At the opening of the school year on Monday, pupils at Carles Central School in Iloilo province held classes under hot tarpaulin sheets.

Carles, 146 kilometers from Iloilo City, is among the northern Iloilo towns worst hit by the super typhoon that struck last Nov. 8.

The classroom of schoolteacher Catherine Enojas was among those damaged by Yolanda. The roof and ceiling were blown off.

“My students were complaining and restless because of the heat and they had difficulty focusing on their lessons,” she told the Inquirer on the phone.

Malacañang admitted on Monday that the government was taking time to rebuild to spare schools from the impact of fierce storms in this era of climate change.

Lacierda, however, said contracts for the construction of resilient school buildings were now up for bidding.

“We will do this as fast as we can expedite it to the full extent of how the law permits,” he said.

With millions of children trooping back to schools in Eastern Visayas, Education Secretary Armin Luistro said he had seen to it that there would be “temporary learning spaces,” either tents or temporary structures in the disaster zone.

Lacierda, however, said the opening of classes in public schools across the country was “generally peaceful and orderly.”

He said the Philippine National Police had deployed 18,500 personnel for more than 7,400 police assistance desks.

“This is over and above the regular mobile and foot patrols that will be likewise focused on the different schools and campuses. The PNP has earlier set the operational guidelines and procedures to ensure a safe, secure and peaceful opening of classes up to the succeeding weeks,” he said.

In Estancia town in Iloilo, classes resumed in tents at devastated Botongon Elementary School, according to teacher Leo Amisco. The super typhoon destroyed five classrooms, the principal’s office and the computer room in the school. About 700 books and 450 chairs were also washed away or destroyed.

School repairs and replacement of destroyed classrooms have been undertaken mainly by private donors.

The Department of Education (DepEd) in Western Visayas said the repair work would start by mid-June or July as the procurement and bidding process for the projects were still ongoing.

At least 1,042 classrooms in the region were destroyed by the super typhoon. Thousands of others were also damaged, according to a DepEd report.

For teacher Priscilla Mesias, it was “business as usual” despite the sorry situation at Santo Niño Elementary School in Tanauan, Leyte province.

School principal Marlon Tangpuz said that with all the school’s 20 classrooms destroyed, more than 500 students were in five makeshift classrooms and three tents donated by the United Nations.

At San Jose Elementary School in San Jose District, Tacloban, more than 2,100 students were in 28 makeshift classrooms. All the school’s 90 classrooms were destroyed or damaged, said principal Monina Gabrino. The school, one of the biggest in Tacloban, had a previous population of over 4,200. About 123 students were confirmed to have died due to Yolanda.

At San Fernando Central School, also in Tacloban, 147 displaced families were still sheltered in its 20 rooms as the city government looked for a place to relocate them.

Rosario Aurea, 58, said: “The classes started already and we don’t like to be a disturbance. We are already tired of living in a classroom. I think, we deserve a better living condition. We don’t have any privacy at all.”

It’s back to tent schools