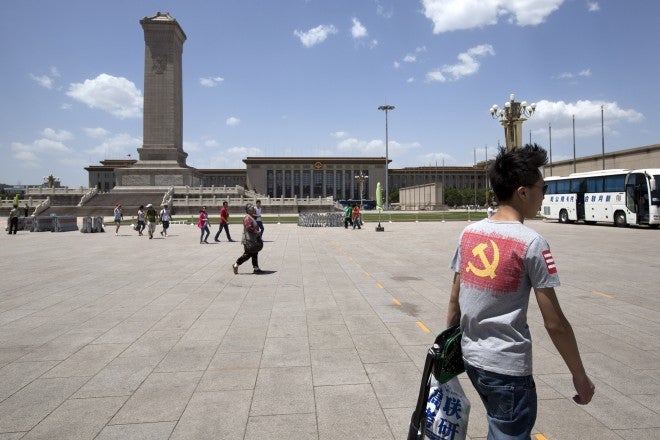 In this May 27, 2014 photo, a teenage tourist wears a t-shirt displaying a logo of the Chinese Communist Party as he visits Tiananmen Square in Beijing. A quarter century after the Communist Party’s attack on demonstrations centered on Tiananmen Square on June 4, 1989, it is little more than a distant tale to young Chinese. Dissidents who helped spearhead the 1989 Tiananmen Square protests on Monday blasted China’s one-party rule and called on the international community to pressure Beijing into embracing democracy. AP PHOTO/ALEXANDER F. YUAN

WASHINGTON–Dissidents who helped spearhead the 1989 Tiananmen Square protests on Monday blasted China’s one-party rule and called on the international community to pressure Beijing into embracing democracy.

Exiled former student activist Wang Dan and intellectual Wang Juntao marked the 25th anniversary of the deadly crackdown in Beijing by launching a new movement from the United States, roughly translated as “All people around the world surround the cit.”

They are pressing for greater human rights in China and seeking to break through what they called the “figurative Great Wall” that they say is preventing the world’s most populous nation from achieving democracy.

“Our movement will continue until the communist one-party dictatorship ends,” Wang Dan told activists and reporters at an event in the US Capitol, where Chinese dissidents joined congressional leaders last week in commemorating the anniversary with a moment of silence.

Wang said the movement is a symbolic one, with potential for street protests in cities worldwide aimed at highlighting alleged abuses committed by Beijing.

“We want Washington to pay more attention to human rights and the political issues of China. I understand they’re beating around the bush, not wanting to face the political problems with the Chinese government, but I think this is short-sighted.”

The dissidents also warned that a quarter-century later, the children of those responsible for the crackdown that left at least hundreds dead have since become China’s ruling elite, suppressing dissent with similar effectiveness.

“Currently, the sons and daughters of the June 4 slaughterers and butchers have hijacked the national power, becoming the super-rich nobility of the country,” said Wang Juntao, reading from a statement.

“Over the past 25 years the Chinese people once hoped that as the Chinese economy took off and its treasury became more full, that after the Olympics were held (in 2012), the Chinese communist regime would become more confident and tolerant, implementing a constitutional system,” he added.

“However it didn’t happen that way. The Chinese communists became even more oppressive and brutal than before.”

Wang Juntao said that many citizens, forced into line by authorities, “gave up fighting against the Chinese autocratic regime. They sat by and did nothing, or even helped the rise of this tyrannical monster.”