Absence of mom deepens grief at burial of baby 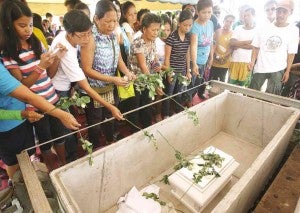 IBAAN, BATANGAS—The baby of a female rebel suspect now in detention after her capture by the military has been buried here in internment rites that drew a crowd of sympathizers and an undetermined number of government spies.

Around 10:30 a.m. on Thursday, Diona Andrea, who died just after being born in a tightly guarded hospital, was buried amid a clamor during the ceremony for the freedom of her mother, rebel suspect Andrea Rosal.

Rosal is being detained by the military on suspicion she is a member of the New People’s Army, which has been waging a guerrilla warfare against the government and demanding equality and justice for more than 20 years now.

Rosal had been allowed to visit her baby for three hours, but was denied the chance to attend her baby’s burial here.

Felicidad Inandan, 64, a relative of Rosal, expressed anger at the military’s decision to bar Rosal from attending the burial rites for her baby.

“I am angry. We are angry,” she said. “The mother was not allowed to send off her child for the last time. They could just have brought in a battalion of soldiers along with her,” Indanan added.

According to Indanan, Rosal felt that her baby faced a future similar to hers. “The government will also arrest her because she is Andrea’s daughter,” said Indanan.

Rosal is daughter of the late Gregorio Rosal, or Ka Roger, the well known spokesperson of the NPA.

When Rosal was captured by the military, she was eight months pregnant.

In a previous interview, she said despite her pregnancy, she had to sleep on concrete floor at Camp Bagong Diwa, the military camp where Rosal is being detained.

She said when her baby died, she was not even given a private moment to grieve. “When I was weeping, officials of the BJMP (Bureau of Jail Management and Penology) never even gave me privacy as they were in the same room as me,” she said.