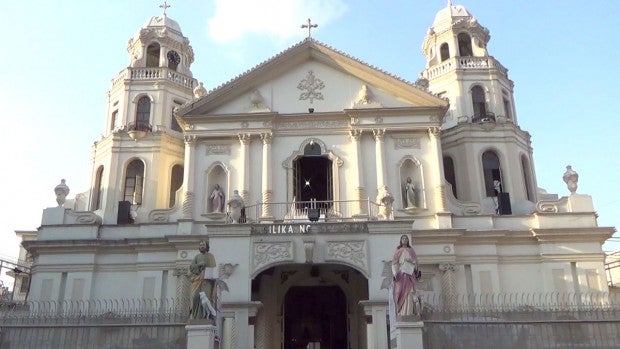 “Technically speaking, accepting a donation the source of which you do not know does not make you culpable,” Tagle told reporters in Filipino on the sidelines of the World Economic Forum on East Asia at Shangri-la Hotel in Makati City.

Tagle said, however, that the controversial donation should serve as an “eye-opener” for other priests, who should now be careful in accepting donations to their charities or ministries.

Cubao Bishop Honesto Ongtioco and Novaliches Bishop Emeritus Teodoro Bacani also defended Ramirez on Friday, saying the retired rector of Quiapo Church was born to a well-to-do family and would not ask for money for selfish reasons.

The prelates said many people sought Ramirez’s help because they knew he was trustworthy.

“They know that he does not ask for personal motives. I know that because Cardinal Sin also turned to him for his worthwhile causes,” Bacani said, referring to the late Manila Archbishop Jaime Cardinal Sin.

What is important, Ongtioco said, is that the donations from Napoles were properly used and “with the right intentions.”

Ongtioco said Ramirez presumed that Napoles was “in good faith in giving the donations.”

“Except for those who are known to be corrupt, drug lords and gambling lords, you cannot ask where the donation came from,” Ongtioco said.

Ramirez’s accepting donations from Napoles became known on Thursday when the Inquirer, serializing the contents of the files of pork barrel scam principal whistle-blower Benhur Luy, reported that the businesswoman gave the priest P2.5 million in May 2007.

Napoles also spent P434,451 for the trips of Ramirez and four Chinese priests to Rome for the World Apostolate Congress of Mercy in October 2008, Luy’s records showed.

An entry in Luy’s files showed that Ramirez received donations from Napoles on several occasions, with the total amount coming up to P800,000.

Ramirez, who retired two years ago, issued a statement on Thursday acknowledging the Inquirer report, but explained that he accepted the donations “in utmost good faith and without any knowledge as to the source of the funds.”

He said the May 2007 donation was P2 million, not P2.5 million, which Napoles gave for a microfinance program run by the Caritas Manila charity.

The donations were made by Magdalena Luy Lim Foundation, which Napoles established in memory of her mother, Ramirez said.

He said he accepted the donations “with the sole intention” of using the money for the projects of the Divine Mercy devotion in the Philippines and in China.

“As he said, in a way, it was also a revelation to him,” Tagle said.

“The way I heard about it from him, he accepted [the donation] from a friend who happened to be the mother of Janet Napoles, and this Mrs. Lim was a devout Catholic. Msgr. Ramirez used to be the parish priest in Binondo. So there’s a lot of the Chinese community helping,” he said.

“And [according to] his statement, he accepted it in good faith. He seemed to be uncomfortable about asking where the money came from,” he said.

Luy’s records showed that the money used for the donations came from lawmakers’ Priority Development Assistance Fund (PDAF) allocations that Napoles and the legislators allegedly misused in connivance with corrupt government officials.

Napoles allegedly siphoned off P10 billion from the PDAF into the bank accounts of her fake nongovernment organizations over a period of 10 years.

But Tagle said Ramirez was not involved in the irregularity.

“The Church also has laws. But in this case [Ramirez will not be disciplined] unless he himself was involved in the corruption,” Tagle said.

Tagle said he saw no problem with sponsored foreign trips of church workers.

“Some priests go to the Holy Land on pilgrimages. And very often, their trips are paid for by the travel agent who organized the trip. That’s OK,” he said.

Tagle said the Church had no procedures for accepting donations.

“Direct personal donations are rare. Usually, donations are made through the collection box, so we don’t know who gave them,” he said.

“Donations directly given to priests are allowed,” he added.

But after Ramirez’s getting dragged into the pork barrel scandal, Tagle said priests needed to be more careful when accepting donations.

“[This has served as an] eye-opener, you don’t just accept any donations and say thank you,” he said. “It’s not being cynical, but it’s better to be wise and try to find out the source of the donation.”

Tagle said the Church is working out measures to make donations transparent.

Most parishes and religious orders have bodies handling finance, he added.

Bacani said the Inquirer’s report on Napoles’ donations was “misleading.”

“Those are donations, not bad bread. And the name Napoles before was a good name,” Bacani said.

“Those were donations and nobody said it came from the pork barrel of the lawmakers … he (Ramirez) was friends with Napoles’ mother, who was a good person so if he was being helped out by the daughter of a friend, then that is not something suspicious,” Bacani said.

“Msgr. Ramirez comes from a family of means in Cavite. So those who seek aid, they know that he doesn’t ask for his personal needs but for people who need help,” he added.

What’s going to happen in 2015? Nothing, says minister about Asean Integration