Cardinal Tagle to gov’t: Don’t forget the poor; where is growth going? 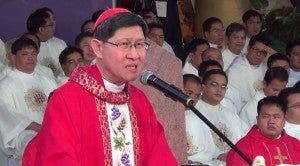 Ensuring that both the rich and poor benefit from the growing wealth in the Asia Pacific will be the biggest challenge for the region’s leaders.

This was the key message at the end of the World Economic Forum on East Asia on Friday, an event which the Philippines was hosting for the first time. More than 700 government and civil society experts from 40 countries converged in Manila for the three-day conference, which government drumbeaters have billed as the country’s “coming-out party.”

“First, I think the challenge is how to deal with the fair distribution of wealth,” said Takeshin Niinami, the head of Japanese retail chain Lawson Inc. who cochaired the WEF East Asia.

“This region has been transforming into a second stage of economic growth,” Niinami said.

Noting that the region’s emerging middle class would play a key role in ensuring Asia’s continued prosperity, the businessman said governments should invest heavily in their people by educating them better and providing them with better healthcare services.

The most senior prelate of the Catholic Church in the Philippines reminded Filipino leaders on Friday that their efforts to further grow the economy would be in vain if poverty is not reduced.

“It’s really worrying that, as it is being said, statistically our economic growth has been high but the poverty level has not dramatically gone down,” said Manila Archbishop Luis Antonio Cardinal Tagle, talking to reporters on the sidelines of the WEF meeting Friday.

“So the question is, where is that growth going? There is indeed growth, but the majority of Filipinos are not benefiting,” said Tagle who was a panelist at a session that discussed civic engagement as a way to create an inclusive and peaceful environment in the region.

Inclusive growth remains a major problem for the Aquino administration. Despite growing by 7.2 percent in 2013—the fastest in Southeast Asia—unemployment in the Philippines remains high at 7.5 percent as of January.

The country is also falling behind in fulfilling the poverty-reduction targets it has committed under the United Nations Millennium Development Goals. Under the MDGs that were set in the year 2000, the Philippines committed to cut poverty in half to 16.6 percent by 2015.

Under its midterm Philippine Development Plan, the government has said poverty incidence would be reduced to just around 18 percent.

The Aquino administration has been drumbeating the record economic growth rates being posted over the past few years, including the 7.2-percent expansion of the gross domestic product (GDP) last year. Under the government’s updated Philippine Development Plan (PDP), the GDP growth is expected to rise further to between 7.5 and 8.5 percent in 2016.

“We need to be constantly renovating our way of thinking,” she said.

Another key issue facing the region is geopolitical stability, especially as China asserts its territorial claims in the South China Sea. Niinami said the successful integration of the 10-member Association of Southeast Asian Nations (Asean) in 2015 would be key to the region’s stability.

As a single unit, Asean will be able to defend the claims of its individual members against China, he said.

The region’s progress also remains contingent on its ability to adapt to the effects of climate change, which the World Bank in a statement this week said was the biggest challenge Asia faces in the next two decades.

“(Yolanda) is the new normal” has become a popular saying in the Philippines since the devastating typhoon of November 2013, the World Bank said in a statement on Friday.

“The impact of natural disasters an economic crisis can hurt us at a faster and more destructive pace than ever before,” said Atutoshi Nishida, chairman of Japanese tech firm Toshiba Corp.  Nishida was also one of the forum’s co-chairs.

The next WEF on East Asia will be held in Jakarta, Indonesia.

Tagle said the Philippines was not alone in facing the challenge of closing the gap in GDP and per capita growth.

He recalled that when he was invited to the annual WEF conference in Davos, Switzerland, last January, the same problems were being discussed—inequality, growth benefitting a very few, the shrinking middle class.

But he pointed out that, at the end of the day, the impressive economic numbers being touted by the Aquino government must be reflected in the people’s lives.

“We are all agreed, whether it be simple citizens or experts, we are all concerned that this is not real growth,” he said.

Beyond just being baffled as to why many Filipinos remain poor despite the country’s economic rebound, the government and the business sector should focus on “what should be done” to address poverty, Tagle added.

“What are they prepared to do? How should business be done so that growth will not be exclusive, [and] will be more inclusive,” he said.

The cardinal said poverty levels can be cut down only if the government introduces drastic reforms.

“Some changes would have to be made, and those changes would demand some decisions not only in policy but also in distribution of the growth,” he said.

The archbishop also expressed concern about the sustainability beyond the Aquino administration of the political, monetary as well as fiscal reforms now being put in place.

Mr. Aquino ends his six-year term in 2016. He is prohibited by constitutional term limits from running for a second term.

The World Economic Forum is an international institution committed to improving the state of the world through public-private cooperation in the spirit of global citizenship. It engages with business, political, academic and other leaders of society to shape global, regional and industry agendas.

Incorporated as a not-for-profit foundation in 1971 and headquartered in Geneva, Switzerland, the forum is independent, impartial and not tied to any interests. It cooperates closely with all leading international organizations (www.weforum.org).