Bill requires nip/tuck docs to get NBI clearance from patients 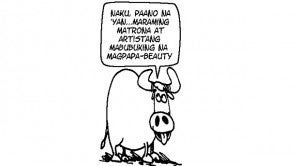 FACE IT: Some criminals have managed to elude the law by undergoing plastic surgery to alter their features radically.

Citing two recent cases of felons who have undergone cosmetic enhancements to escape authorities, Quezon Rep. Angelina Tan has filed a bill requiring patients to first secure clearance from the National Bureau of Investigation before being allowed to undergo facial plastic surgery.

“The bill aims to forestall criminals from hiding their identities and (evading) arrest by requiring facial plastic surgery patients to present an NBI clearance before undergoing a procedure,” Tan said in her explanatory note.

According to the bill, before performing any reconstructive procedure, plastic surgeons must first require their patient to submit an NBI clearance, which would then become part of the patient’s medical records.

Cosmetic surgeons who defy the measure risk an official reprimand for the first offense, and fines ranging from P5,000 to P20,000 for subsequent offenses. The Department of Health may also suspend or cancel their licenses to practice their profession.

In pushing for the bill, Tan cited the case of Abigail Pendulas, wife of pyramid scam suspect Manuel Amalilio, who evaded arrest for a year after she got a noselift that “radically altered” her features.

Tan said the cosmetic surgery made it difficult for authorities to identify Pendulas. Police caught up with the suspect earlier this month.

The Quezon representative also pointed to robbery gang leader Alvin Flores, who underwent plastic surgery to avoid being identified and arrested by authorities.

Flores, who had a nose lift, temporal lift, and eyelid surgery, was killed in an encounter with NBI operatives in 2009.