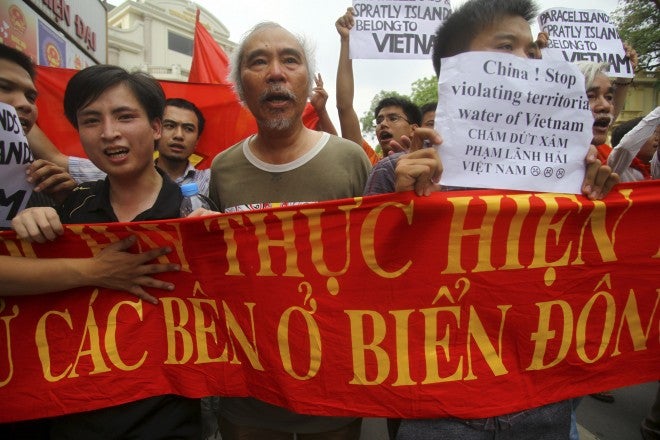 About couple hundreds of Vietnamese people gathered in a protest against China demanding China to stay out of their waters following China’s increased activities around the Spratly Islands and other disputed areas. Hanoi, Vietnam 12 June 2011. AP

HANOI, Vietnam — Vietnamese state media say a 67-year-old woman has died after setting herself on fire in a protest against China.

The report on a website of Thanh Nien newspaper says the incident occurred in downtown Ho Chin Minh City early Friday in front of the former presidential palace.

It quotes a senior government official Le Truong Hai Hieu as saying the woman had banners protesting China’s recent deployment of an oil rig off the Paracel Islands in waters also claimed by Vietnam.

The three-week standoff has raised fears of confrontation after Vietnam deployed ships in an effort to stop China’s drilling operations.

Vietnam’s government has clamped down on street protests after they morphed into anti-Chinese riots that that left two dead and damaged factories.

US military concerned over tension between China, Vietnam